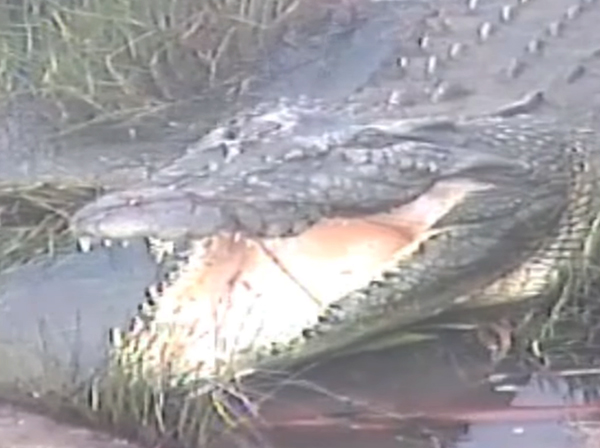 Acting Mayor Neil Fisher said the Department of Environment regularly receives sighting reports along the Fitzroy River, and urged people to be crocwise whenever they are near the water.

Council reported the sighting to the Department of Environment who monitored the crocodile with removal considered unnecessary as the animal hadn’t exhibited any dangerous behaviours.

Fitzroy River Water and the Department of Environment and Science (DES) is installing additional signage at the Barrage to warn the public of the crocodile’s presence.

Acting Mayor Fisher advises “Crocodiles are a vital part of the Australian eco-system and are commonly found in waterways such as the Fitzroy River.

“This crocodile was filmed on the bank of the river opening its mouth and demonstrating normal crocodile behaviour. This behaviour is not considered threatening or concerning."

Acting Mayor Fisher said the sighting was also a timely reminder for those who fish illegally at the Barrage fish ladder to stop once and for all and added “Fishing is banned 400 metres upstream and 400 metres downstream of the Barrage to help preserve fish stocks.

“However, staying away from known crocodile habitat also seems like a pretty good reason to me.

“We’ve recently seen some children illegally fishing just 20 metres from where this croc was spotted, so please make sure you and your family are staying safe and not breaking the law.”

The public is encouraged to report all crocodile sightings to the Department of Environment and Science. Reports can be made via the Qwildlife app (available on the app store or Google play store) or by calling 1300 130 372.

DES is reminding people that Rockhampton is known Croc Country and urge people in the area to always be Crocwise.

Further information on being Crocwise is available here.

Image: This crocodile was filmed on the bank of the Fitzroy River opening its mouth and demonstrating normal crocodile behaviour. This behaviour is not considered threatening or concerning. You can watch the footage on Rockhampton Regional Council Facebook page