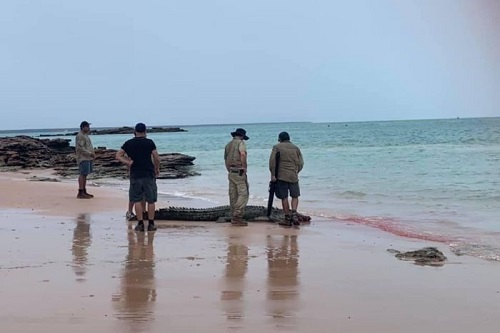 Western Australian Parks and Wildlife Service officials have defended the decision to kill a 3.7-metre saltwater crocodile at a popular Broome beach in Western Australia's Kimberley.

Images of the dead crocodile sparked outrage on social media, with some people describing the killing as "disgraceful" and "horrible".

The crocodile was spotted at Cable Beach on Thursday (24th January) and the public was warned not to swim in the area.

The Parks and Wildlife Service said the crocodile was euthanased at Entrance Point on Friday afternoon "after several attempts to remove the animal failed".

Marine Park Coordinator Christopher Nutt said the decision was not taken lightly, but he understood why people were upset the action was taken.

Nutt told the ABC "I can completely understand and empathise with them. It was an amazing animal, an incredible creature.

"(But) we have an obligation to look after (public) safety.

"It is not something we like to do. It was a very difficult decision that we came to. That was the best course of action in the circumstances."

Crocodiles are left undisturbed across most of the Kimberley, but management areas have been created around townships to ensure saltwater crocodiles are removed from populated rivers and beaches. 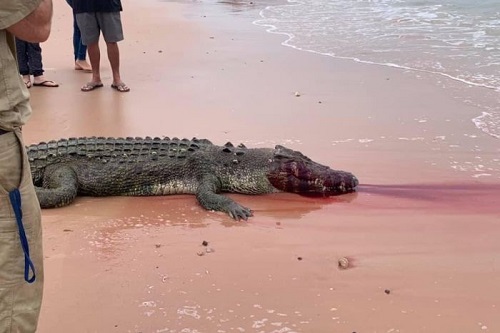 Nutt said difficult weather conditions had hampered efforts to capture and relocate the animal, which was the preferred course of action.

He said it was believed the crocodile was first reported to authorities on Wednesday after it approached children swimming at Town Beach.

Nutt added "it also approached a gentleman walking his dog on Cable Beach.

"When a crocodile of that size exhibits that sort of behaviour then we think about how are we going to deal with it.

"The behaviour it was exhibiting made it very difficult for capture and it was also posing an increased risk to the community and visitors.

"(Crocodiles) are a protected species and the remit of our department and Government is to look after the environment, so you can imagine that we don't make that decision lightly."

Nutt said the crocodile was killed humanely and it died instantly, concluding "the people that undertake this sort of work do it because they are passionate about the environment and care deeply.

"The ranger that actually dispatched the firearm said it best. He said: 'I'm not proud that I killed such an animal but I am proud that I did my job well'."