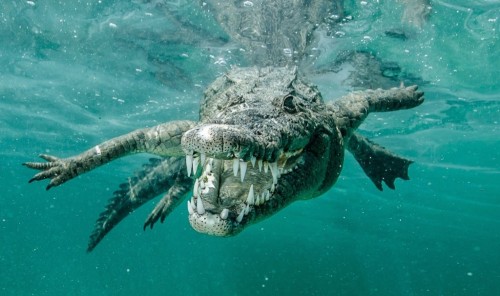 A growing number of crocodile attacks is forcing police in the Solomon Islands to shoot the animals and to consider lifting a 30-year ban on exporting their valuable skins in order to control the population.

According to the Guardian Australia, there have been more than 10 crocodile attacks on people this year, as well as dozens of assaults on livestock and domestic animals around the Solomon Islands, which has a population of 600,000 people.

However, the actual number of incidents is probably far greater, as attacks often happen in remote regions of the country where villagers take crocodile control into their own hands and do not report attacks to authorities.

Superintendent Stanley Riolo, the Director of the Department of National Response, told the Guardian Australia that the most recent fatality was in April, when an eight-year-old girl was killed by a crocodile in the western provinces.

In that instance local villagers speared the crocodile from behind, wounding it, and then drowned it in a river. A more humane death was impossible, said Riolo, as the villagers have no guns to shoot the giant saltwater, or estuarine, crocodiles – which can grow up to 7m (23 feet) long – since firearms were banned under an international agreement in 2003.

A specialised police crocodile control unit has now been set up to deal with the increasing number of attacks.

Since May this year, when the Royal Solomon Islands police force was rearmed, the crocodile control team has been equipped with Remington bolt-action rifles, hunting in banana boats at night when crocodiles’ eyes glow red in the dark, making them easy targets.

This year the specialist team has killed 40 crocodiles – including one that was 6.4 metres long.

The 14-year international Ramsi intervention (Regional Assistance Mission to Solomon Islands), which wound down in June, saw Solomon Islanders stripped of all armaments in a move to control violence between warring ethnic factions, which had led to the death of 200 people and the displacement of tens of thousands.

Riolo added “crocodile attacks began to increase in the years after Ramsi arrived, and we believe it is because the villagers didn’t have guns any more to protect themselves and shoot the crocodiles.

“We are currently in discussions to plan a post-Ramsi crocodile control programme, but at the moment our only option is shooting them.

“There have been so many attacks: the crocodile population is out of control.”

Joseph Hurutarau, the Solomon Island’s Deputy Director of Conservation, says his team is planning a national survey of the crocodile population this year so it can accurately measure and explore the reasons behind the growing number of attacks.

Hurutarau’s team believes the crocodile population began to increase 30 years ago, when the the export of crocodile skins – a once lucrative industry for locals – was banned.

However, Craig Franklin, a zoology professor and crocodile expert from the University of Queensland, warned “when we say populations are exploding, what is also growing out of control is the human population, and the two often get mixed up.

“The more humans you have living in crocodile country, the more likely you are going to have these negative interactions with crocodiles.”

If a crocodile does take a human, it does need to be captured, Franklin said, as the animal will return to stalk humans once it has identified them as a source of food.

Professor Franklin said shooting crocodiles as a means of population control is a “poor outcome” for the animals, adding that the reasons for any purported population growth need to be carefully examined.

Hurutarau said his team was keen to seek advice, stating “we are looking for assistance from international crocodile experts so we can undertake a report with scientific data and information that will prove the crocodile population is slowly increasing, as we believe it is.

“The long-term plan is to reintroduce the exportation of crocodile skins, but only to the extent of managing the population and the number of attacks. Crocodiles are still a protected animal and we have to find a balance to maintain a healthy population but also to protect people who live in coastal areas who depend on the ocean for their livelihood.”

Professor Franklin said many of the communities with the best relationships with and respect for crocodiles are in the Northern Territory and Cape York of Australia, where local Indigenous people revere the animals and have learnt to live side-by-side with the apex predators.

He concluded “to go out and shoot crocodiles is really dangerous because it can lure people into a false sense of safety … and crocodiles do play a really important role in the ecosystem and need to be protected.

“I absolutely sympathise and agree we need to ensure people’s safety, but I often think the best way is to educate people about how to be croc-wise.”

Image: Saltwater crocodiles are the world’s largest reptile and are currently a protected species in the Solomon Islands.