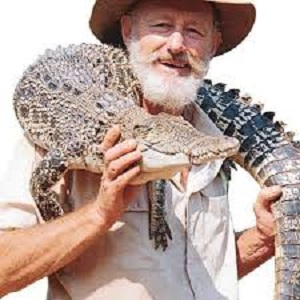 Douglas' son Lachlan has been reported as saying that the animal attractions were more of a lifestyle proposition than a commercial one and that he has doubts as whether they can continue to operate.

Douglas junior was quoted as saying "the reality is these were more of a lifestyle proposition for my father than a commercial one - and without him, things can't continue the way they have, so we need to really start to reflect in a pretty serious way about what all that means."

Established in 1983, and located on Broome's Cable Beach, Malcolm Douglas' Broome Crocodile Park serves as a research and breeding centre and as well as being a visitor attraction.

Much of its income comes from selling crocodile skins in US dollars but this is struggling because of the high value of the Australian dollar.

Located 16 kilometres from Broome, Douglas was developing his Wilderness Wildlife Park and Animal Refuge to give visitors a unique wilderness experience, described as "very different from other nature parks."

Douglas (pictured) died last week in a vehicle accident. His wife, Valerie, was the beneficiary of his entire estate, including a huge stock of film footage.

It is believed that some of the film could be used to promote conservation through the Save The Kimberley organisation, of which his Douglas senior was a director.

Mark Jones, who made about 15 documentaries with Douglas, has stepped in to manage the parks. He said he had contracts for two more films.

For more information go to www.malcolmdouglas.com.au/default.asp