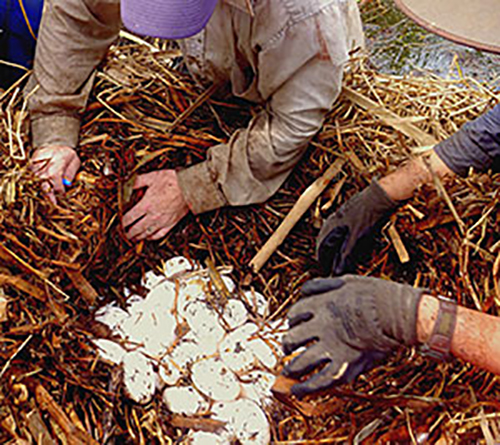 Over 113,000 Wildlife Warriors have united to campaign with Australia Zoo owner Dr Terri Irwin to overturn the Queensland Government’s decision to allow crocodile eggs to be harvested from the wild so the hatchlings can be grown for their skins and meat.

Queensland’s saltwater crocodiles are listed as vulnerable under the Government’s own Nature Conservation Act that states the criteria for declaring a species as vulnerable is if its population is decreasing, has seriously depleted, is low or is at risk because of threatening processes.

“Crocodiles are listed under the same vulnerable category as koalas. Interestingly, crocodiles are even more important to the environment than koalas. This apex predator has a trophic cascade effect on every other animal in its ecosystem. Taking croc eggs from the wild to hatch, grow and turn into boots, bags and belts is incredibly detrimental to the environment,” Dr Irwin said.

The one-in-500 year flood that has just devastated North Queensland will have a significant impact on this vulnerable species.

“January is the peak nesting period for saltwater crocodiles and with nests completely wiped out from floodwaters further harvesting of crocodile eggs in North Queensland will have an irreversible impact on an already susceptible species.”

“It is foolish and flies in the face of environmental science stating that crocodile egg harvesting won’t impact the species given only a small number of crocodiles actually hatch and survive to adulthood.

“This is completely ignoring the vulnerability of the species and the knock-on effect harvesting will have on the eco-system as the eggs and hatchlings are a food source for other animals and young crocs feed on insects and smaller prey which helps to moderate the number of other species,” Dr Irwin said.

Working in partnership with leading scientists from the University of Queensland the Australia Zoo specialist croc team continues to undertake the longest and most comprehensive research on saltwater crocodiles ever conducted throughout the world.

“For over 16 years we have researched saltwater crocodiles with the University of Queensland and we have made numerous submissions to the State Government sharing our research and providing scientific evidence of the detrimental impacts of crocodile egg harvesting; this has and continues to be ignored,” said Dr Irwin.

Australia Zoo believes the Government is listening to flawed advice by those who have a vested interest in slaughtering crocodiles as they are affiliated with crocodile farms throughout the state.

“The conditions in which crocodiles are farmed are absolutely disgusting. Crocs are subjected to extreme cruelty; piled in on top of one another, some with horrific injuries such jaws and limbs torn completely off. Yet the owners of these facilities are the ones charged with policing this new egg harvesting legislation,” Dr Irwin said.

“Let’s stop for a minute and think why croc farms want to harvest wild crocodile eggs when they have thousands of crocs at their farms. It’s because the conditions are so poor that their crocodiles aren’t successfully breeding so they need to take eggs from wild nests.”

“Steve would be horrified that our Government is allowing Queensland’s saltwater crocodiles; a vulnerable, native species, to be exploited in this way,” Dr Irwin concluded.