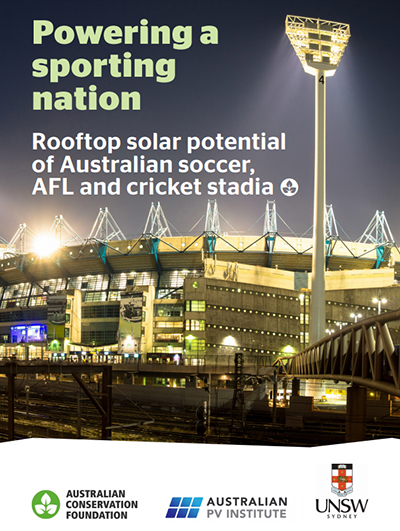 Research conducted by the University of New South Wales School's Photovoltaic & Renewable Energy Engineering (SPREE) and the Australian PV Institute (APVI) ), on behalf of the Australian Conservation Foundation (ACF), shows there is a lead role for AFL, cricket and football clubs, associations and national governing organisations to play in mitigating the impacts of climate change in Australia.

Together, the rooftops of AFL clubs, national and state football federations and administrative facilities, and the major cricket stadium in each state could host more than 77,000 metre² of solar panels, generating more than 20,000 megawatt-hours of clean energy annually - or enough to power around 2,900 households.

The Powering a Sporting Nation report and related papers research found the installation of solar panels on major stadiums and headquarters would create jobs and prevent 310,000 tonnes of climate pollution over two decades.

In the long term, by going solar these sports could save a combined total of approximately $3.7million annually. 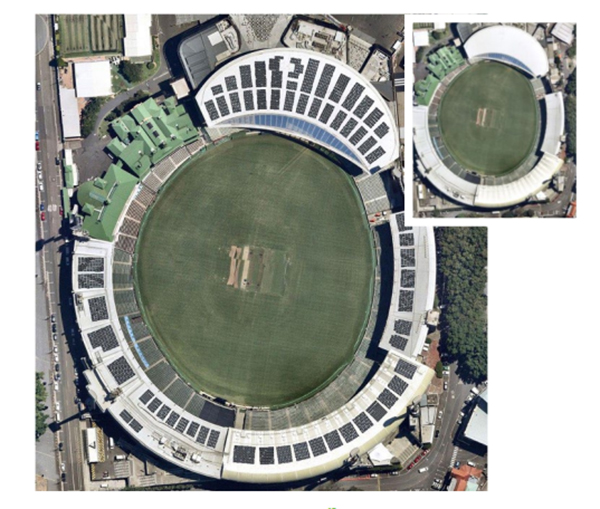 The report also identified Metricon Stadium on the Gold Coast as having solar generation opportunies (see Editor's note below).

Among best practice examples, North Melbourne Football Club is a leader in clean power generation, with its Arden Street headquarters and adjoining North Melbourne Recreation Centre powered by solar as a result of an investment by the City of Melbourne, the Clean Energy Finance Corporation and the Kangaroos.

The 800 panel, 200kW system was the biggest in the City of Melbourne when installed in 2016 and has helped reduce the club’s reliance on grid-supplied power by 22%.

This installation followed Richmond Football Club’s installation of a 100kW solar system during the redevelopment of its Punt Road Oval home in 2014 - and it more recently becoming the first AFL club to join the United Nation’s Sports for Climate Action Initiative.

ACF Campaigns Director Paul Sinclair notes “from the biggest stadium to the smallest clubrooms, Australian sports can work together to become powered by 100% clean energy.

“To become pollution free in the next decade, Australians need to work together and get on with the job of making our country a clean energy superpower.

“The solutions to do this are available right here, right now. Moving to clean energy creates jobs, cuts energy costs and gives Australian rivers, forests and wildlife a chance to thrive.

“The costs of missing the opportunities before us are huge. More catastrophic bushfires and weather events will destroy homes of people and wildlife.

“Extreme and deadly heatwaves will threaten the lives of Australians, including sportspeople and fans at elite and community levels.

“At its best Australian sport brings people together to achieve great things. Now is one of those moments when Australia needs its sportspeople and fans to play like a great team. 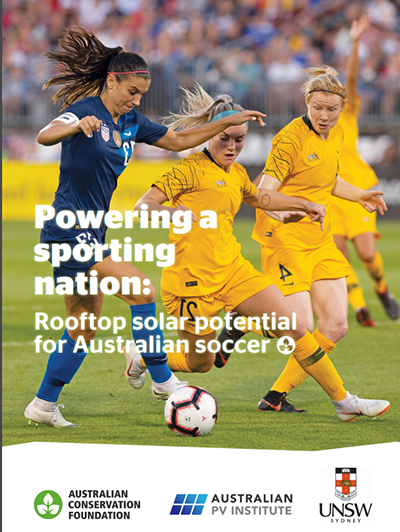 Collingwood AFL star Jordan Roughead is concerned about climate change and advises “we have seen the impact global warming is having on sport, particularly over the last few years. The science says if we don’t change the way we’re living now, future generations are going to suffer.

“If we can work as a team and work towards a common goal to protect our climate and our environment, our impact will be significant.”

Editor's note, Metricon Stadium’s ‘solar halo’ - 2nd May 2021
While the Powering a Sporting Nation report suggests potential for solar power generation at Metricon Stadium, its 2011 redevelopment saw the installation of what was then Australia’s largest Building Integrated Photovoltaic (BIPV) system with 600 custom made solar panels from Netherlands-based Scheuten Solar integrated into the roof of the structure.