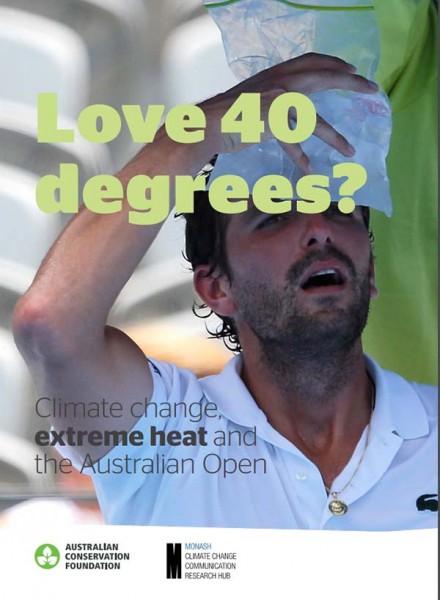 The Monash Climate Change Communication Research Hub has produced a new report, Love 40 Degrees? Climate change, extreme heat and the Australian Open, which aims to prompt authorities to recognise the threat climate change presents to tennis and take action to safeguard its future as a summer sport.

With Januarys predicted to become hotter and this year’s Australian Open already marred by smoke from bushfires, new research finds:

Gavan McFadzean, Climate Change Program Manager at the Australian Conservation Foundation (ACF), which commissioned the research advises “climate change is already hitting the Australian Open hard, with its recent history of players competing in extreme heat and the lead up to this year’s tournament marred by smoke from bushfires.

“The number of days over 35° in Melbourne during January is predicted to increase in coming decades.

“Appropriate heat policies are important to protect player health, but so is action to combat climate change, which is driving this extreme heat and more ferocious bushfire seasons.

“Tennis authorities have a responsibility to recognise the threat climate change presents to the Australian Open’s future as a January tournament.

“We commend Tennis Australia for joining the UN Sports for Climate Action Framework and urge it to raise its voice for strong, meaningful climate action from our government.”

Image shows the front cover of the report, with Julien Benneteau at the Sydney International tennis tournament. Photo. AAP