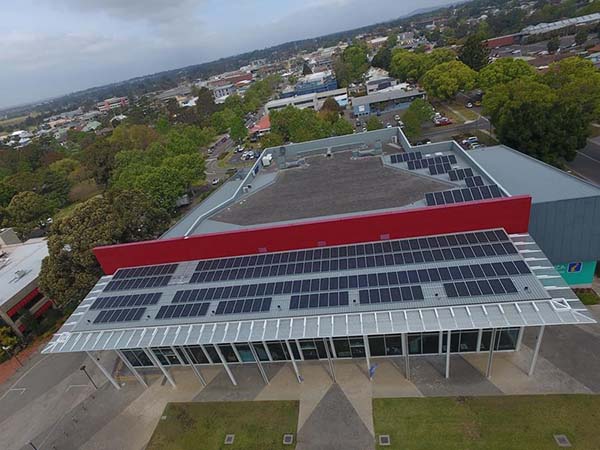 Shoalhaven City Council is moving forward with their renewable energy policy target, with the installation of 200 solar panels on the Shoalhaven Entertainment Centre rooftop.

Installation began last month on the large 81-kW solar photovoltaic (PV) system being installed by an external local contractor Simmark. The system is estimated to generate around 112,000 kilowatt hours of renewable electricity every year, which is enough electricity to power on average 17 homes.

Advising that this project is just another example of Shoalhaven’s commitment to sustainable energy, bringing the City closer to its net-zero greenhouse gas emissions target by 2050, Shoalhaven Mayor Amanda Findley stated "once commissioned, the new solar installation is set to reduce electricity consumption of the Entertainment Centre by around 20% per year, resulting in an annual saving of $12 500 for Council. The solar power generation will also save 91 tons of carbon emissions a year, which is the equivalent of taking 30 cars off the road.

“The Shoalhaven Entertainment Centre was an ideal building for this project, given its large daytime electricity consumption, extended opening hours and its large roof space.

“As we move another step closer to our 2050 target of net-zero greenhouse gas emissions, I hope this will encourage other residents and businesses to take up solar installations on their premises’.

The installation (pictured) was completed at the start of this month.