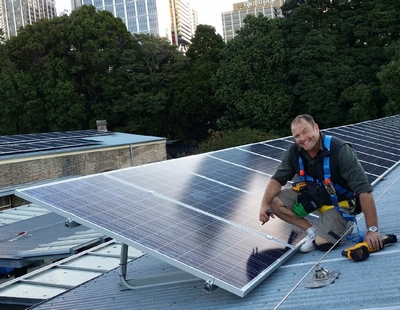 The Royal Botanic Garden Sydney has this week unveiled state-of-the-art energy-saving measures to help power the epicentre of the Garden’s operations more sustainably.

The expansive Central Depot - home to the Garden’s horticulture team, nurseries and machinery - is now harvesting abundant solar power thanks to 80 (300-watt) solar panels which are on track to provide 25% of the Depot’s energy needs and annual savings of almost $7,000 in energy charges.

Manager Domain and Infrastructure Gary Hinchliffe said the new 24 kW installation was an example of the Garden’s focus on reducing waste and maximising resource recovery.

Hinchliffe stated "we estimate that this new system on the Depot’s vast roof-space will pay for itself in less than seven years, which is a great return on investment.

"In addition, the system will save the equivalent of 11 tonnes of coal being burnt each year in power stations and achieve a reduction in CO2 emissions equivalent to taking 10 cars off the road each year."*

Contractors Apricus with partner Ecoinstallers proved exemplary in guiding the project through many challenges including the optimisation of panel placement to ensure lengthy exposure to the sun despite many large shady trees, and the installation of safety lines to allow for easy ongoing inspections of the large-scale installation.

The NSW Government requires its agencies to undertake energy-efficient projects under theauspice of the Government Resource Efficiency Policy (GREP). Under the scheme, the Botanic Gardens received approval for the 24 kW installation this financial year. The system can be expanded at a later date if further funding is made available.