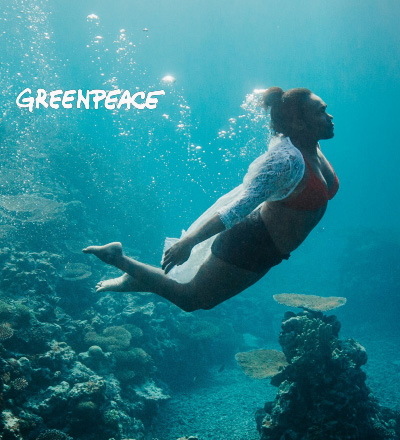 According to a new report released today by Greenpeace Australia Pacific, current climate policies mean the world is on course for up to 3.9 degrees of heating, which would see a number of Pacific Island countries go under the ocean due to sea level rise.

Te Mana, o te Moana 2021 analyses each country’s climate commitments as part of the Paris Agreement, and reveals that while stronger climate targets from some of the world’s biggest emitters go some way to reducing the chances of catastrophic climate change, others such as Australia’s will lock in almost three degrees of heating, a level incompatible with life in the Pacific.

The report’s key findings include:

Greenpeace Australia Pacific Non-Executive Director Kavita Naidu notes “the Pacific is reeling from the compounding impacts of the climate crisis and COVID-19 pandemic with communities facing deepening poverty, loss of livelihoods and irreversible damage to land and marine ecosystems.

“Pacific communities are deeply connected to their ancestral lands that have shaped their cultural heritage and ways of sustainable living for generations. Climate change, driven by coal, oil and gas is increasing displacement of these coastal communities from their homes, villages and communities, threatening their identities, cultural practices and relationships with land, nature and their social environment.

“By refusing to support reparations for historic climate damage in the Pacific, Australia is shirking responsibility and not doing its fair share. It’s made worse by the Morrison Government’s persistent support of the expansion of the fossil fuel industry, which sentences people in Australia and the Pacific to intense heatwaves, longer droughts, bushfires, cyclones, a warming ocean and the devastating loss of biodiversity.”

Greenpeace Australia Pacific Head of Research and Investigations, Dr Nikola Čašule advised that since the election of US President Joe Biden, some of the world’s biggest polluters had significantly improved their 2030 emissions reduction targets with the UK, US and EU leading the way, however, Australia is lagging behind.

Dr Čašule highlights “comparing the performance of the UK or US with Australia’s is like comparing a Ferrari with a go-kart. They’re not in the same category.

“The Morrison Government’s climate failure is so bad that it places Australia in the company of countries like Saudi Arabia and Russia. Prime Minister Scott Morrison has rightly been called out on the world stage and with Australian policies completely at odds with the Paris Agreement those calls will only grow louder in the lead up to COP26 in Glasgow.” 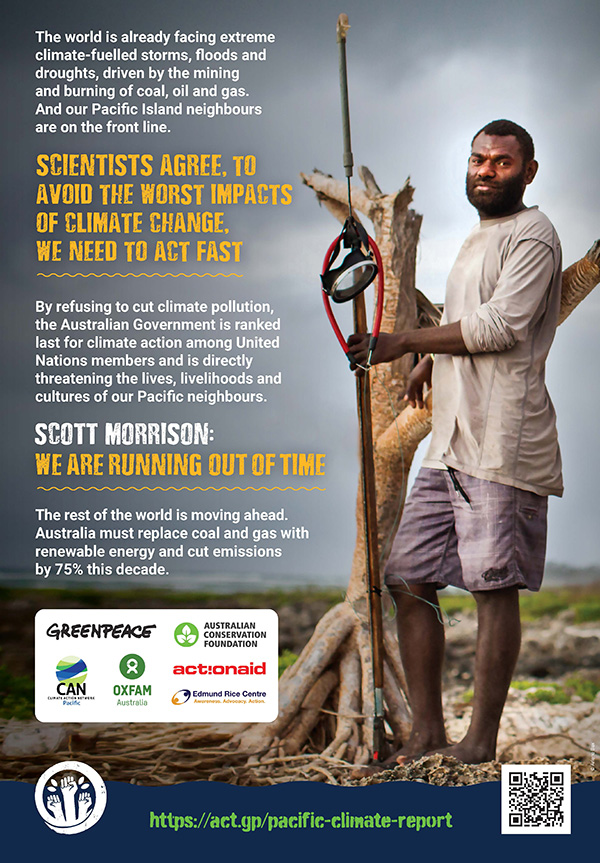 This morning, Greenpeace Australia Pacific, the Edmund Rice Centre, Oxfam, the Pacific Islands Climate Action Network, the Australian Conservation Foundation and Actionaid took out the above full page advertisement in the Sydney Morning Herald calling out the Australian Government’s poor climate policies and urging it to commit to a 75% cut in emissions by 2030 to help protect the Pacific from the impacts of climate change.