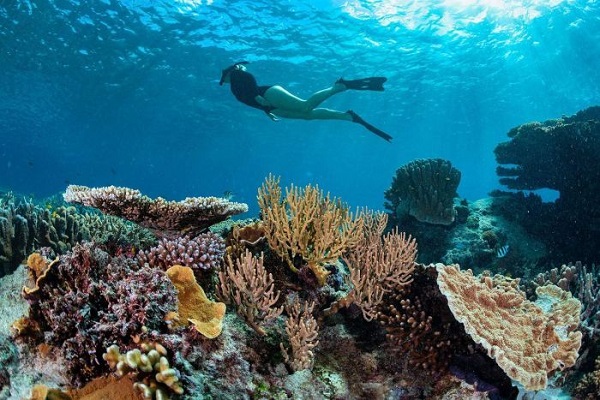 A report released today, ‘The expected impacts of climate change on the ocean economy’, suggests Australia’s Great Barrier Reef tourism, despite its best management practices, will not be insulated from any losses due to likely global climate impacts.

The report released in Madrid and commissioned by the High Level Panel for A Sustainable Ocean Economy, which includes the Australian Government, paints a disturbing picture for the future of our oceans and the communities dependent on them.

The report assesses different climate change scenarios and their impacts on fisheries and reef tourism.  It suggests potential economic losses by the end of the century of over 90% for reef tourism around the world. While the details of future predictions over such a long-term horizon are always open to debate, the magnitude of the threat is evident.

“For governments, for the community and for industry the time for urgent and coordinated action has well and truly come – the long-term future of our industry depends on it, as do the jobs and livelihoods of communities all along Queensland’s coast.

Gschwind added “Any responsible risk manager would accept this, and all the other scientific evidence, as a priority red-light warning of what is at stake.

“We can invest in the biological and economic future of the Great Barrier Reef (GBR) now or bear a far greater cost in the future”.

Gschwind noted “We need to accelerate these efforts in strong partnerships with all levels of governments and the community to do more to build the GBR’s resilience but we cannot ignore our national responsibilities to tackle the global climate change threat.

“Reef visitors who experience both the beauty and the threats of the GBR are the strongest advocates. With clear messaging from tourism operators, the story of the reef is shared with millions of visitors annually and is driving action and change among those who participate.”

Australian Marine Conservation Society (AMCS) Director of Strategy Imogen Zethoven noted the concerning research was yet more incentive for the Australian Government to show global leadership on climate change and urgently transition to renewables to help save our World Heritage Reefs.

Zethoven commented “Earlier this week, the Australian Government stated in its Great Barrier Reef report to UNESCO’s World Heritage Committee that climate change is the Reef’s biggest threat. But it did not commit to actions through to 2030 that will limit national and global temperature to a level that would secure its future.

“The breathtaking beauty of our Great Barrier Reef is a magnet for tourists from around the world and is part of our national identity as Australians. But the recent back-to-back coral bleaching events caused by a warming ocean driven by climate change shows that our Reef is in grave danger. We should be doing all we can to help sustain its beauty and biodiversity  and ensure the Reef tourism industry has a future.

“It’s not too late to save our Reef, but time is critical as this latest report illustrates. Australia needs to commit to rapid and drastic reductions in greenhouse gas emissions to limit global warming to no more than 1.5 C which will safeguard the future of our Reef and avert an economic crisis for the tourism industry.”

The tourism industry has been advocating strongly for action on climate change for some time, with the first GBR tourism climate change report released by QTIC and WWF in 2004.  The industry and reef tourism operators have taken their responsibility very seriously over more than a decade and are operating at world’s best practice.  The industry has also effectively partnered with the Great Barrier Reef Marine Park Authority to position the GBR as the best managed reef in the world. The strong focus on the GBR has also led to action on water quality and other measures to improve the local resilience of the GBR.

The GBR tourism industry showcases the reef to two million visitors a year, sustains 64,000 jobs and generates $6 billion in expenditure in the local economy annually.

The paper calls for more conservation and restoration measures for coral reefs to aid resilience, as well as actions that will reduce the climate impact of tourism.