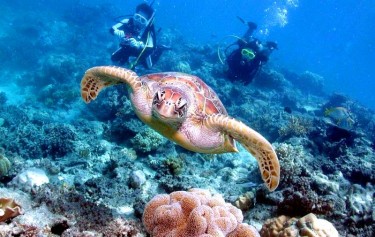 The attraction of the Great Barrier Reef to Australian tourists has “fallen dramatically” since the onset of successive coral bleaching events in 2016, according to a new report that reveals fewer domestic visitors are heading to north Queensland to visit the natural wonder.

The report, by the Centre for Tourism and Regional Opportunities at Central Queensland University, says towns should now develop “new tourism experiences” to compensate for lost visitors and the likelihood of further damage to the climate-threatened reef.

In Cairns, domestic visitor numbers and revenue from interstate tourism were down in 2016 and 2017 with a survey of domestic tourists arriving at Cairns airport finding that, at the start of 2016, the third most common reason for visiting the tropical north city was to see the reef.

By the third quarter of that year - after news reports that the marine heatwave was causing the biggest coral bleaching event in history - the reef dropped to 12th on that list.

The survey conducted by CQU found that visitors to Cairns “were generally aware that coral bleaching was occurring through media reports and that there was a high and increasing level of concern about the bleaching events”.

I added “this result suggests that if further coral bleaching events occur in the near future the destination’s target markets will quickly become aware of the event and may base purchase decisions on concerns about the level of reported damage. The danger for the destination is that repeated bleaching events will form a pattern in the mind of consumers and may generate a long-term negative image.”

The Great Barrier Reef, which is the largest living structure on the planet, features heavily in Australian tourism promotions. It remains the top reason for international tourists to visit Cairns. The report says the likelihood of further and more severe coral bleaching events was “alarming” for tourism businesses in areas such as Cairns, Port Douglas and the Whitsundays.

The report continues “if predictions of further and more severe bleaching are correct, these destinations will face a future of declining tourism interest, at least for those groups of tourists who rank the [reef] as the key motive for visiting the affected destinations.

“Further coral bleaching may lead to a significant decline in international tourism, with resultant economic impacts.” 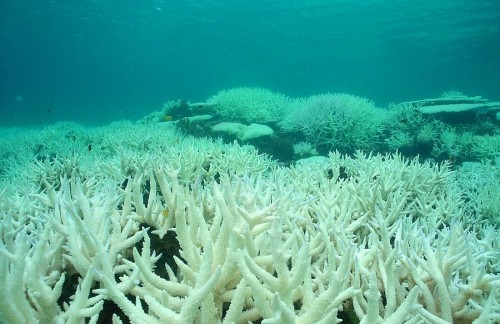 In the Whitsundays, where the tourism industry is better insulated from damage to the reef by more resort-style experiences and swimming beaches, visitor numbers have been skewed by damage caused by cyclone Debbie.

Tony Fontes, a Whitsundays-based dive operator, said there was “no doubt” the drop in tourist numbers had been caused by climate change and the resultant coral bleaching.

Fontes says some tourism businesses had “put their head in the sand” about bleaching and refused to admit there was a problem, mainly out of fear that negative publicity would discourage visitors.

Fontes told the Guardian Australia “in 2017 when the bleaching moved further south, the tourism industry started to become a little more proactive than what they used to.

“By hiding and not admitting that we’ve got a problem, that’s not helping. They’re starting to come together and advocate for better action, better late than never.

“We’ve exploited the reef forever as tourism operators. Very few of us have ever given anything back to the reef. Not enough of us are standing up to back the reef.”

The report was focused on local actions that could be taken to support the tourism industry.

These included developing new attractions that could motivate tourists to visit for other reasons, and to encourage “positive rather than negative media on the future of the GBR”, something that has led to tension between concerned reef scientists and some in the tourism industry.

Images: The Great Barrier Reef as promoted to visitors (top) and bleaching on the Reef (below).