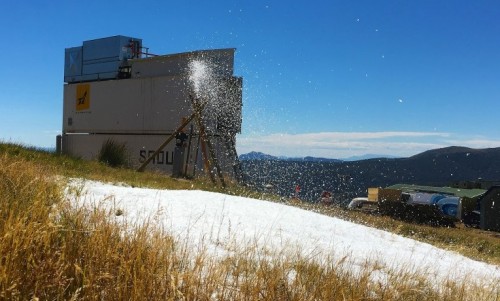 To combat predictions that climate change will slash the duration of Australia's ski seasons, resorts are making big investments in snowmaking equipment to ensure the industry can keep drawing tourists to alpine regions in the winter months.

The first month of the current winter was the driest June on record in much of southern Australia, while July brought record-breaking heat and little rain.

However, despite those conditions, the snow industry has been reporting pretty much business as usual at Australia’s alpine resorts, with visitor numbers tracking around average.

Colin Hackworth, Chief Executive of the Australian Ski Areas Association, said the $1.5 billion industry has long recognised "if you have no snow, you have no business" and had been investing in snowmaking for decades.

Hackworth told the ABC that snowmaking is particularly important early in the season when there is excitement about visiting the snow, but often little natural snowfall, commenting “this will make snow at 30 degrees Celsius. In April and May you can start making these big piles of ice chips and actually they are very resilient. They take a long time to melt.

"When it comes close to the ski season you doze them all out with a machine so you have guaranteed snow.

"In years going forward all the resorts will have snow on the ground. June will become a regular part of the ski season. Before it was very much touch and go."

Hackworth sees this as a huge leap from the early days of snowmaking in Australia, when manually operated snow gun systems were used to top up natural falls, adding “technology has improved from manual snow guns where someone has to go and turn the tap on and off in the middle of the night, to automated systems with their own weather stations.”

He describes the technology as working like an industrial ice-cream churner, explaining "you plug it in, put water in one side and there's a drum that spins around inside that freezes the water and it gets spat out the other end as ice particles.”

Ongoing investments in artificial snowmaking has Victorian resort Mt Buller extend operational days from about 100 in the 1970s to 106 in a typical year now, even with less natural snow. Diversification has also brought in ‘snow tourists’, with many visitors just heading to the mountains as spectators, rather to ski or snowboard.

Figures compiled by Victoria's Alpine Resorts Co-ordinating Council showed visitor numbers to Mt Buller in the opening week of the current ski season were up 148% on last year and the highest they had been in the past 10 years - despite a distinct lack of natural snow in the region early in the season.

Buller Ski Lifts General Manager Laurie Blampied commented "I think the June in north-east Victoria was the driest since June 1907."

However, since 14th March a TechnoAlpin SF220 Snowfactory has been operational at Mt Buller, leading Blampied to comment “the difference between the snowfactory and conventional snow making is that it doesn't rely on the ambient temperature conditions to be able to produce snow"What that means is that we can make snow continuously 24 hours a day, seven days a week, virtually at any temperature."

Mt Buller artificial snow has stockpiled and spread around the slopes since April, ensuring there was enough snow on the ground to guarantee a start to the season come opening weekend.

Blampied adds “that's always been the challenge for the ski industry around the world.

"You really have to wait for the snow before you can open, and natural snow can make that (season opening) come earlier or later.

"Conventional snowmaking gives you a little bit more surety around that, but with this technology and this approach to snowmaking we can guarantee an opening date."

In NSW, Australia's largest ski resort, Perisher has spent $22 million in the past decade on expanding and upgrading its snowmaking capacity to cover more than 53 hectares of the resort with 236 snow guns, and has plans to increase the area covered to 110 hectares. 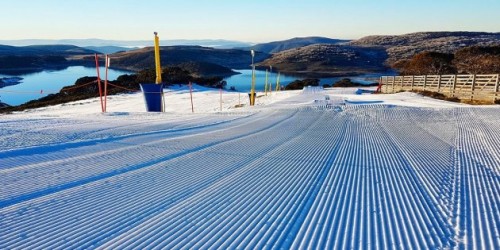 Even much smaller resorts like Lake Mountain, close to Melbourne, and Tasmania's Ben Lomond, have introduced snow guns to bolster natural snowfall.

Hackworth said many resorts could now open large areas of ski fields with no natural snow at all, explaining “what the industry unquestionably has embraced is that they are no longer reliant on natural snowfalls.

"If it comes to pass that climate change delivers zero snowfall, the resorts will cope with it."

Blampied said snowmaking had proven to be a successful adaptive strategy for climate change, but he conceded it did have limitations, with more snowmaking requiring more water, stating “ultimately the availability of water will dictate the extent of the snowmaking system at any given resort.

"If you had limitless water you could put snowmaking on every trail.

"We don't have that luxury here at Mt Buller and we are in the process of securing a planning permit for an additional 100 megalitre storage which can be filled from the existing water rights."

Hackworth credits advances in snowmaking with helping Australian ski regions record steady visitation levels, with slow growth year on year, even in the face of unpredictable seasons, and he predicts it will keep playing a vital role in years to come.

He concludes “the industry is remarkably resilient ... it's a mature industry but it's growing every year."

• Conventional snowmaking produces snow by forcing water and pressurised air through a snow gun
• Unlike natural snow that forms an ice crystal with six tiny arms, man-made snow is six-sided like an ice cube
• Snowmaking was accidentally discovered in the 1950s when a Californian farmer sprayed his crop with water to prevent frost damage
• It was first trialled in Australia at Perisher in 1967
• Most Australian resorts installed significant systems in the 1980s and 1990s
Source: Australian Ski Areas Association, Wikipedia