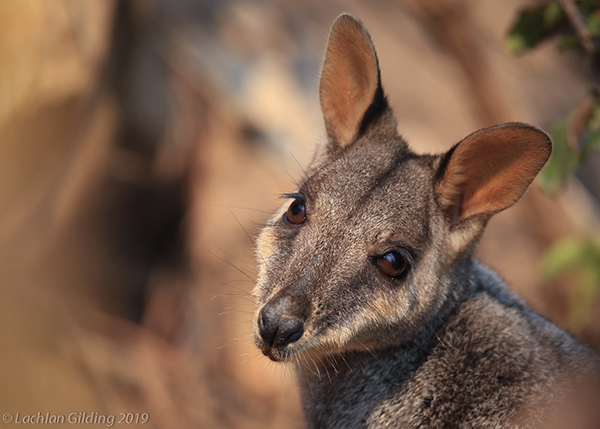 Aussie Ark is working alongside the New South Wales National Parks to coordinate a regional approach of assessment of the Brush-tailed rock-wallaby sites - monitoring food drops and intervention if and when necessary.

In early January 2020, Aussie Ark was invited by the New South Wales State Government to assess the situation of Brush-tailed rock-wallabies.

The assessment found numerous deceased wallabies. Several from starvation and dehydration, while others were struck by a vehicle in search for food, water and shelter, as the area is not preferred wallaby habitat. Encouragingly up to 30 were found residing near waterbodies. These wallabies are now receiving food drops and ongoing remote camera monitoring until the situation improves.

Regionally, all of the Brush-tailed rock-wallaby sites have been incinerated or are at imminent risk of fire. Coupled with the nation’s worst drought in recent decades, limited food and water supply is wreaking havoc on populations. Camera traps placed last week have captured a female wallaby carrying pouch young and another pair mating.  Supplementary food sources and drops are helping to sustain surviving populations.

Aussie Ark President Tim Faulkner advises “Whilst there are encouraging signs that food drops are working and there is still available water in some areas, to find deceased wallabies is an absolute kick in the guts.

“The state department response is most welcome and is buying the wallabies time until conditions improve.”

Aussie Ark has worked with this species long before recent events and are continuing their commitment to their survival. If emergency intervention becomes a necessity, Aussie Ark has a purpose built, specialised facility ready to house, rehabilitate and re-release Brush-tailed rock-wallabies.

Aussie Ark has committed to double its species recovery projects to create a new facility for the northern population of the species. The Ark currently has 7 purpose-built facilities that provide home for up to 45 wallabies. Doubling this has its obvious benefits for the species.

Sensibly, the response from department to protect human life and asset, has now been extended to wildlife. A regional collaborative approach to Brush-tailed rock-wallabies can and will make a difference to their survival against these unforeseen and unprecedented fires and droughts. Aussie Ark remains committed to the cause, now and until the threat is clear.

Aussie Ark is collecting donations to help continue their work providing supplementary food sources to wildlife such as the Brush-tailed rock-wallaby.