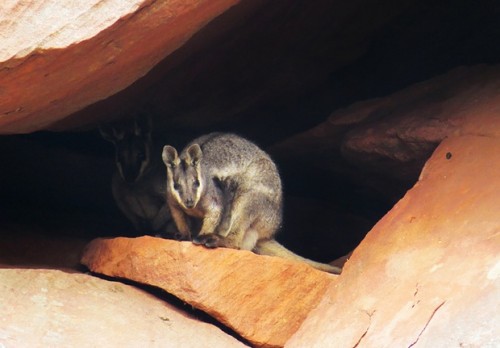 Black-flanked rock wallabies have been released into Western Australia's Kalbarri National Park s part of an effort to re-establish a population of the threatened species in the park.

A total of 23 radio-collared rock wallabies from three Wheatbelt populations have recently been translocated by Department of Parks and Wildlife staff and volunteers, with assistance from WWF Australia.

Black-flanked rock wallabies were considered extinct from the park for 20 years, until two wallabies were filmed in a gorge in 2015. The sighting was later confirmed by Parks and Wildlife camera monitoring.

To date, 46 radio-collared rock wallabies have been released into the park from the Wheatbelt, with 23 introduced last year. Monitoring has shown only one animal from last year's translocation is known to have died and the remainder of the wallabies are doing well.

Parks and Wildlife have been culling goats in the park since 2006, with goats having caused the initial decline of the species as they competed for food and pushed the wallabies out of the protected gorge areas where they were vulnerable to fox and cat predation.

Under the Western Shield wildlife conservation program, Parks and Wildlife have carried out fox baiting in the park since 1996, and implementing Eradicat® cat baiting, which is supported by $1.7 million in Australian Government funding for further cat control in Western Australia..

The nearest known population of black-flanked rock wallabies is more than 450 kilometres away in the Wheatbelt, and there are some scattered populations much further north in the Pilbara.

Commenting on the program Western Australian Environment Minister Stephen Dawson stated “the ... Government is working towards establishing a healthy population of black- flanked rock wallabies in the Kalbarri National Park once again.

"Managing the threat of goats, foxes and feral cats is key to the long-term prosperity of the species in the park, and this will benefit other mammal, bird and reptile species in the area.

"Remote sensing cameras have been deployed throughout the park, and this is helping us learn more about the species' behaviour so we can better protect them in the future, as well as monitoring predator levels."