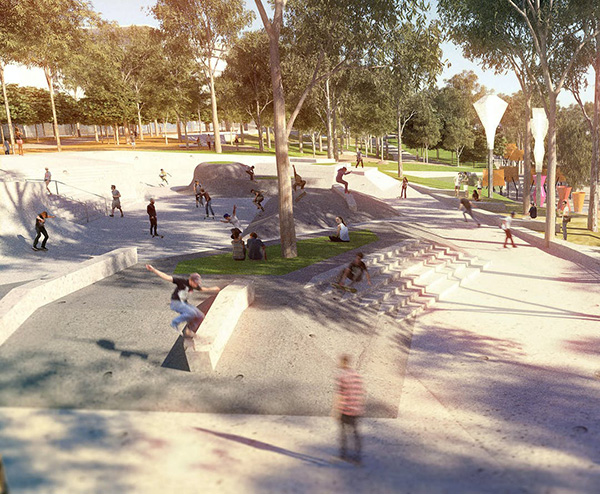 The South Australian Government and City of Adelaide have unveiled recently finalised concept designs for the new City Skate Park, being integrated into Gladys Elphick Park/Narnungga (Park 25), on the corner of West Terrace and Glover Ave.

The concept designs were recently finalised incorporating feedback received through the consultation process.

Last year, the State Government provided the $3 million funding required for the City Skate Park, due to be completed next year.

The City of Adelaide will develop a youth and family space that is easily accessible by public transport and available to all demographics.

With the existing site features and proposed master plan development, the facility will create a dynamic and activated central community hub to offer recreational and social experiences for all members of the community.

“The end result will be a skate park that’s inviting, family friendly, caters for a range of disciplines and skill levels and be stand out destination within South Australia’s skate park network.”

South Australian Minister for Child Protection and Member for Adelaide, Rachel Sanderson welcomed the next step towards delivering the $3 million new skate park.

Minister Sanderson enthused “it’s fantastic to see these modern plans for the new City Skate Park, delivering a safe, fun and dedicated park that will be used by South Australians for many years to come.

“I really urge the community to view the plans on the City of Adelaide’s website in the coming weeks.

Detailed design is currently underway and it is anticipated that works will commence on site by the end of 2020 and be completed mid-2021.

4th September 2020 - New skatepark in the pipeline for Condingup youth