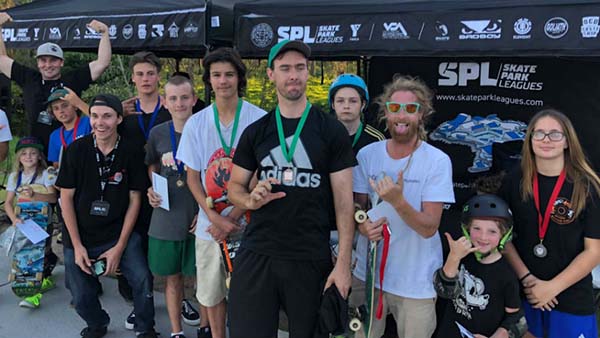 The Skate Australia National Park Championship includes World Skate Rankings and qualifying points for the 2020 Tokyo Olympics, the only Olympic qualifier for park in Australia.

23-year-old Newcastle skater George Richards will be competing in the National Park Championships in Gympie and has his eye on a spot on the Olympic team. He is currently ranked 4th in Australia for Park.

Richards noted “the opportunity to represent your country in a sport you’re passionate about is incredible in itself. The fact that the event is the Olympic Games and the people you’re competing with are your best mates from all over the planet makes that opportunity so much more exciting.”

Over 600 spectators are expected to attend the events this weekend and see skaters from across the country compete for Olympic points and a cash pool of $2,000 in prizes.

YMCA National Events and Program Manager Nick Buskens said the event was a chance for locals to support Australia’s next skateboarding champions and Olympians.

Buskens advised “we believe 2020 is the year our home-grown skaters to shine. We encourage everyone to see their grit, determination and pure talent at Gympie.

“The YMCA and the Australian Skateboarding League is an important stepping stone for these future Olympians.”

The Open Male and Female competitors at the Australian Skateboarding League National Street Championship in Melbourne will also gain qualifying points towards the Tokyo 2020 Olympics.

Karen Doyle, President of Australia’s peak body Skate Australia said the series presents as a great opportunity for young skateboard enthusiasts to showcase their skills and progress through a structured national pathway.

Doyle adds “skateboarding is finally getting the opportunity it deserves, as a highly skilled and popular sport.

“The young people who come through are talented, motivated and going places. The Gympie weekend will showcase the best in the state, with free entry to spectators.”

The competitions are open to all skateboarders from across the country set to attract competitors from across Queensland, and Australia.

For more information on the events go to www.ausskateleague.com.au