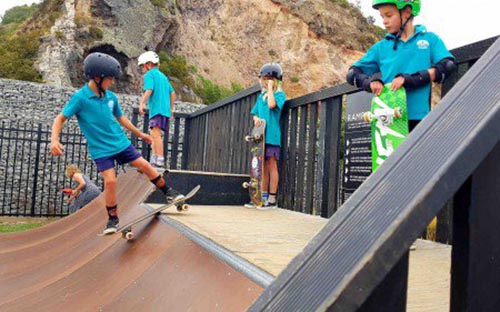 A community green will be created around the planned new skate park in the Christchurch seaside suburb of Sumner.

Greater Christchurch Regeneration Minister Dr Megan Woods has announced the Government will grant Christchurch City Council transitional use of several Crown-owned properties in Sumner to enable the construction of a permanent skate park and a new community green.

Minister Woods advised “Sumner residents have long been calling for a permanent skate park and new greenspace and it’s great that we can now make that a reality.

“The Crown has been working closely with local authorities, community groups and individuals to bring life and community back to the residential red zone areas by activating Transitional Land Use (TLU) projects.

“The Crown will be granting a transitional use over key red zone land in Sumner as part of an interim arrangement while we finalise the transfer of that from the Crown to the Council.

“This will create an acoustic buffer for neighbours and create a new gathering spot in the heart of the village. This will mean great new community facilities for Sumner.''

The Crown properties are next to the former Marine Tavern site, which was selected as the preferred location for the new Sumner skate park by the Linwood-Central-Heathcote Community Board at a meeting in December 2018.

The Board selected the site subject to the Crown transferring ownership of the neighbouring properties to the Council.

Christchurch City Councillor Sara Templeton, who represents the Heathcote ward, says the creation of the skate park has been a decades' long aspiration for the area, adding "a recent site selection process identified this site as the best one. In the meantime, the community have built and operated a temporary one on various sites as part of their community-led earthquake recovery."