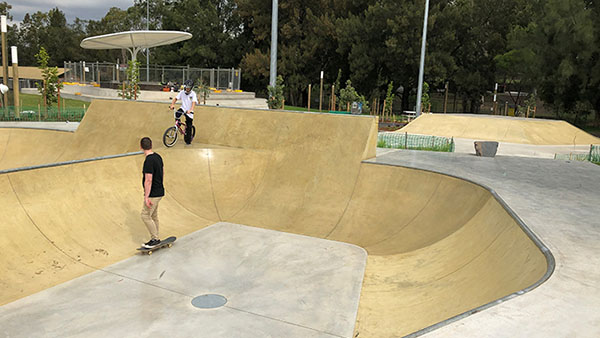 The construction on a new skate plaza next to Federal Park in Glebe will begin this June for skateboarders of all ages and abilities. The skate plaza has been designed by award-winning skate park and youth space designers Convic with JMD Design and is due to be completed in early 2020.

The skate plaza will have ledges, banks, kerbs, walls, rails and stairs, as well as a freestanding mini ramp that will offer skaters of all levels a chance to master their tricks and enjoy the outdoors.

The skate plaza is near the soon to be reopened archways in the light rail viaduct and the existing playground, which will be refurbished and expanded with a focus on inclusive play.

Former industrial land between Glebe and Annandale will also be transformed into new open space and parklands. Pathways for pedestrians and cyclists will pass through the restored viaduct arches, linking the new space to the Glebe foreshore.

“The project will create about one-and-a-half football fields’ worth of new open space on the old Crescent Lands industrial site and restore long-lost views through the heritage viaduct archways to Federal Park.

“This new green space will also link existing parklands on the foreshore to new ones along The Crescent, creating 27.5 hectares of continuous open space.”

The City of Sydney currently has skate parks in Redfern Park, Waterloo Oval, Ward Park in Surry Hills and a mini ramp in Federal Park.