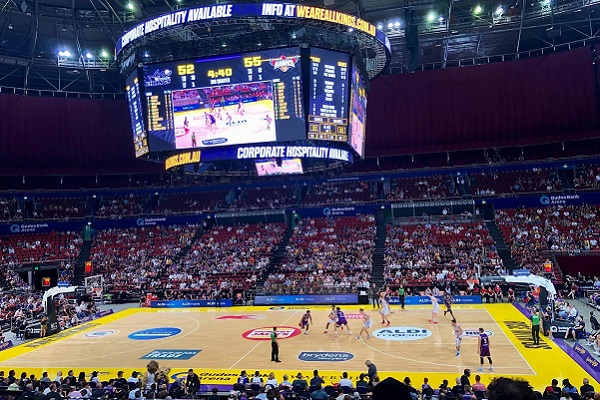 A dispute over logos on the court surfaces at NBL matches has seen a major sponsor direct the Sydney Kings to remove its name from NBL courts until the league allays players’ fears over what they see as potentially dangerous court decals.

Kings naming rights sponsor Brydens Lawyers revealed it had put a key element of its support for the club on hold amid the ongoing dispute.

With the Australian Basketball Players’ Association (ABPA) having repeatedly requested action after players have slipped on or near sponsor stickers on NBL courts, the League has refused to remove or alter the logos, stating they meet FIBA international standards.

Bogut tweeted this week “the NBL has addressed the decal issue by informing clubs all players and club officials will be FINED if they make any more comments about falling on decals.

“NBL funded media have also been told not to discuss the issue. If we don’t talk about it, it didn’t happen.”

This week the NBL warned team and player delegates that penalties will be issued for public criticism that is deemed to “bring the league into disrepute”.

In a statement on Saturday, Brydens Lawyers principal Lee Hagipantelis said the situation was alarming, and cast doubt over his firm’s ongoing support for the Kings and the NBL.

Hagipantelis stated “I am alarmed by reports of players in the NBL expressing concern as to the presence of decals on the court and that same maybe adding to the risk of injury.

“As the Principal of Brydens Lawyers, a firm that has practised almost exclusively in the area of personal injury litigation for over 40 years, I cannot, in good conscience, permit my firm to be engaged in any activity where a risk of foreseeable injury has been identified and the resolution of that risk is obvious.

“Accordingly, as major partner of the Sydney Kings, I have directed the Kings to immediately remove all decals for Brydens Lawyers from all courts on which the Kings will play or train pending a full and proper consideration of the matter undertaken with a view to devising and implementing an alternative situation that will address and allay the concerns of all players.”

An NBL spokesman said the Brydens Lawyers situation “is a matter between the Kings and their sponsor”.

The Kings confirmed they will comply with their sponsor’s wishes, noting in a statement provided to AAP “we’re very grateful to have such a wonderful partnership as the one we have with Brydens Lawyers.

“Following our conversation with Brydens Principal Lee Hagipantelis we understand their concerns, and will leave the floor area clear of any logo, and will work with them to find alternative branding areas to support our great partner.”

In January, the ABPA advised that decals on the court had the potential to cause for injury to players following an Adelaide 36ers and New Zealand Breakers NBL fixture, where players continually slipped on sponsor stickers.

However, speaking with Inside Sport, NBL owner and Executive Chairman, Larry Kestelman, said on-court sponsorship provides many advantages for the league.

Kestelman advised “on-court advertising provides an essential source of revenue for the league and clubs to fund NBL operations including items such as referee costs and the production of our broadcast, which in turn is essential to the revenue generating capacity of our clubs.

“The economics of virtual signage have been closely explored but are not viable.”