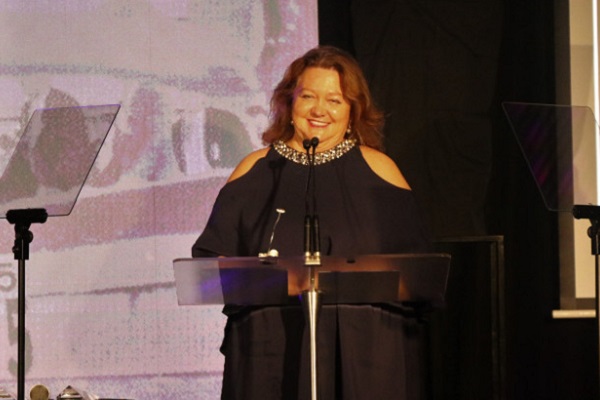 Swimming Australia has recognised its benefactor Gina Rinehart, presenting the Chairman of Hancock Prospecting with its inaugural Lifetime Contribution Award at its 2019 Awards.

Rinehart, whose mineral exploration and extraction company is a major sponsor of Swimming Australia, received the Lifetime Contribution Award as “the highest honour a person can receive for their enduring contribution to the sport and is presented at the sole discretion of the board of directors with a unanimous vote.”

Swimming Australia advised in a statement “for nearly 30 years, Gina has been heavily involved in swimming and her generous contribution has allowed athletes to focus on their performance in the pool - they simply could not succeed without her.

“High performance centres and programs around the country and sport science departments have all benefited from her generosity, while vital training camps are made possible thanks to the substantial role she plays.

“Rarely missing a competition, one can always find Mrs Rinehart cheering on our athletes at the Olympics, World Championships, Commonwealth Games and all national competitions - in her busy schedule she always makes time, and athletes, coaches and their families love having her on the pool deck.”

Mining industrialist Rinehart is Chairman of Hancock Prospecting, a privately-owned company founded by her father, the late Lang Hancock.

Swimming legend and ‘national treasure’ Dawn Fraser was also officially presented with her Swimming Australia Life Membership at the Awards.