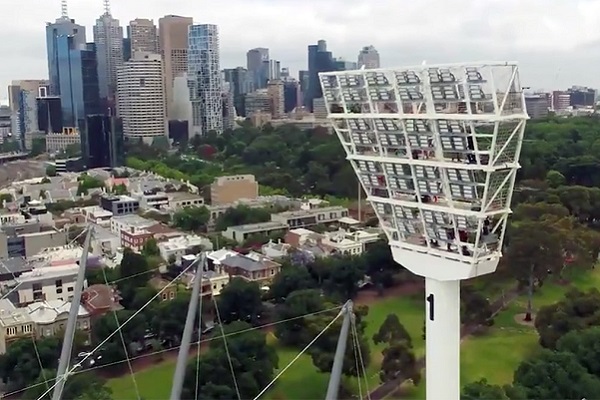 The floodlight towers at the MCG are undergoing a significant change, currently being upgraded to LED technology as part of an $11 million project.

Expected to be completed by late February 2020, the project will see all 1200 metal halide lamps on the six 85 metre high towers replaced by 950 LED lights.

Replacing the halide lamps first installed 35 years ago, the new state-of-the-art lighting will provide a better experience for players and fans both at the ground and watching on TV.

The new lights will be able to be turned on and off instantly, whereby the existing lighting have a 15-minute turnaround time for the globes to cool. They can also be fully controlled, by dimming or turning on specific lights to create a pattern throughout the stadium. There will also be less light spill out of the arena and greater focus on the field of play due to the new light configuration.

The new lights are approximately 50% more energy efficient than the old globes and also have a much longer lifespan, meaning less need for replacements and therefore less waste. On average, 30 lamps from the old light tower technology are replaced each year.

The project will see the MCG come into line with other modern stadiums including Perth's Optus Stadium and Sydney's Bankwest Stadium. It follows another recent technology upgrade where the famous stadium has had a new and improved sound system installed.

During the works, the MCG is ensuring at least four of the light towers are in operation, a configuration which meets the lighting requirement set by the International Cricket Council.

Explaing that the new lights will enhance the MCG experience for fans and players, Melbourne Cricket Club Facilities General Manager, Peter Wearne stated "we are excited for the MCG light towers to undergo a modern makeover, while still retaining their iconic look and feel.

“The existing lights are the same as what was originally installed 35 years ago, so not only were they reaching the end of their lifespan but they had well and truly begun to be outshone by newer technology."

The MCG was first lit up on the night of 3rd December 1984, with the light towers unveiled for a World Championship of Cricket match between Australia and England in 1985.

Image courtesy of the MCC.