Lifeguards ‘did their job’ in Tauranga inflatable water playground incident 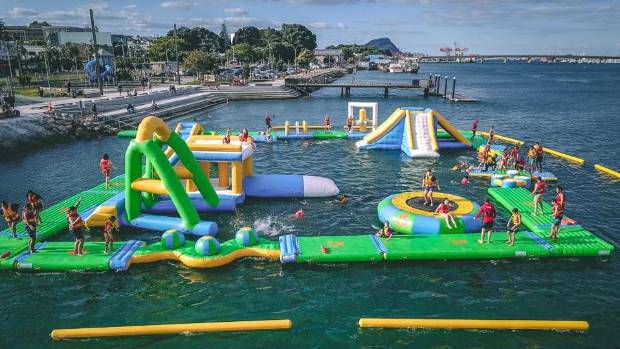 Lifeguards at an inflatable water park in Tauranga have been praised for their quick response in a reported near-drowning incident last Sunday.

The boy, who was wearing a lifejacket, fell into the water at about 3.30pm on Sunday. He was taken by the current underneath another part of the course, and was plucked from the water by a lifeguard after emerging from the other side.

It is understood he was taken to Tauranga Hospital by his parents, where he was kept in overnight.

Water World Manager Jasmyn Hawira said both WorkSafe and the Tauranga Harbour Master's office had been alerted to what had happened, had investigated, and had given them the all clear.

Hawira advised Fairfax NZ "the lifeguard got to him straight away. He coughed up a bit of water, but he was fine ... he wouldn't have been under the water for anything more than 10 seconds."

As with all Water World patrons, the boy had been wearing a lifejacket at the time while the entire incident had been captured on close-circuit cameras.

Hawira said she and Water World owner Kelvin Travers had been dismayed that the situation had been mis-reported by some media, adding "WorkSafe and the harbour master are all cool with it, because they have seen the footage of what happened and they know the real story."

She advised that the safety of those using the aquatic park was taken very seriously. Children under 10 had to be supervised by a parent at all times, and a minimum of one lifeguard for every 10 people on the course was mandatory.

At the time the boy's parent had been on the other side of the course.

She estimated that about 30 people had been on the course at the time of the incident, and there were three lifeguards on duty at the time.

Hawira added "we have been open since Boxing Day and this is the first time something like this has happened. We do get the occasional bruise or maybe a cut when the kids collide, but generally it has been really good."

The only time they closed the park was when the wind strength reached more than 20 knots.

Hawira went on to advise that the flow of water from the usual incoming and outgoing tides did not constitute a danger.

The floating obstacle course sits just metres away from the tidal steps on The Strand. When the fun park opened, Travers told Stuff.co.nz he hoped to open similar parks in other regional towns.

Tauranga Harbour Master Peter Buell confirmed his office had been alerted and they were satisfied users of the course were not at risk.

Buell stated “(Water World management) have done very well. They handled this incident the exact way you would hope it would be handled.

"They did a lot of work with WorkSafe and the Tauranga City Council before they were issued with a licence to operate, and I know they had procedures in place for the possibility of something like this. We will be taking another look at it, but it seems that those procedures worked very well."

WorkSafe investigators had debriefed Water World staff on Tuesday morning and no further action was being taken.