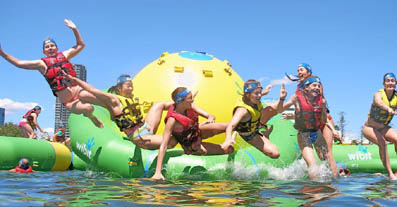 With local newspapers across Australia reporting on entrepreneurs and ambitious local authorities seeking to create 'Wet'n'Wild-style' attractions, the low entry and set-up costs of inflatable waterslides and open water aquatic play features can be a flexible alternative to fixed attractions.

Opened in November last year, the AquaSplash (pictured above) open water inflatable playground at Broadwater Parklands on the Gold Coast was one of the industry’s major successes of the 2013/14 summer, attracting close to 50,000 visits during its operating season.

Many operators and locations are looking to replicate this success, with the Darwin Waterfront Corporation recently undertaking a tender for a open water inflatable playground to operate in the city’s waterfront wave lagoon.

Set to operate through the winter, such a venture would enable the operator to relocate the equipment to southern States during the Australian summer.

Launched 12 months ago, Waterworld Central, Australia's first portable waterpark, enjoyed a successful first season operating on the East Coast, working its way down the coast from installations in Sarina, Prosperine and Gladstone in Queensland, to Newcastle in NSW and on to Sydney's Entertainment Quarter during the summer 2014 school holidays.

This year Waterworld Central (pictured below) is currently scheduled to operate in Hervey Bay, Sarina and Newcastle. 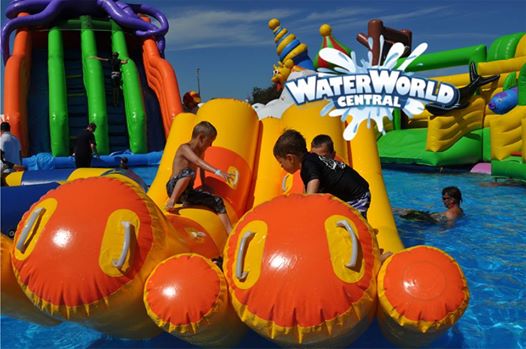 In North Queensland, last weekend (13th and 14th September) saw the opening of the inflatable Water Wonderland at the Townsville Showgrounds.

Described as the ‘world’s largest inflatable water theme park’, the attraction contains four 25 metre round pools, more than a dozen slides, an inflatable maze and an obstacle course.

The attraction will operate in Townsville before being relocated to another, as yet unspecified, location.

The presence to the inflatable waterpark in Townsville has led the local newspaper, The Townsville Bulletin, to report on the attraction as being a potential “catalyst for bringing a permanent Wet'n'Wild-style park to the city.”

Councillor Ernst told The Townsville Bulletin that Water Wonderland’s operators had shown “initiative” by filling a void in Townsville’s tourism industry, stating “they believe there’s a market for it, albeit they’re taking a very temporary style avenue.”

Such has been the impact of Village Roadshow Theme Parks’ waterparks in the past 12 months, particularly Wet’n’Wild Sydney that the term ‘Wet’n’Wild style’ waterpark has entered the vocabulary of ambitious entrepreneurs and ambitious local authorities across Australia.