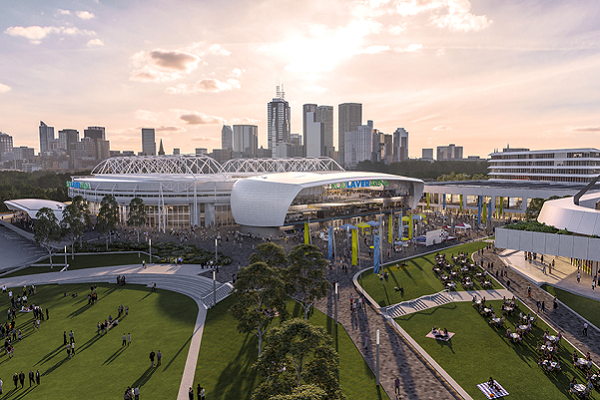 The Victorian Government has announced that Lendlease Building Contractors is to manage the delivery of the $271.55 million Stage 3 redevelopment of Melbourne Park.

The latest stage of the ongoing redevelopment of Melbourne Park aims to guarantee the Australian Open remains in Melbourne until at least 2036 and follows Lendlease having managing the delivery of the Rod Laver Arena refurbishment and Margaret Court Arena as part of stages 1 and 2 of the Melbourne Park redevelopment.

Lendlease’s experienced design and construction team has a strong history managing complex sports and entertainment stadium construction programs across Australia, including the Adelaide Oval redevelopment and the recently completed Bankwest Stadium in Sydney.

Demolition of the old function and media centre started in April, paving the way for a new centre featuring a 1,000 seat function room, pre-event spaces, interview rooms, a 200-seat auditorium and broadcast studios.

Set to be completed before the 2023 Australian Open, Stage 3 will also include construction of a new multi-purpose 5,000-seat sunken show court arena and a new central logistics hub.

Advising that the upgrades will not only provide a better player and spectator experience, but will also offer media broadcasters the perfect vantage point, Victorian Minister for Tourism, Sport and Major Events Martin Pakula stated “this major redevelopment at the heart of Melbourne’s sports and events will create thousands of jobs and bring tens of thousands of visitors to Victoria every year.”

“We’re making Melbourne Park an unrivalled venue for players, spectators and media broadcasters and we’re proud to play our part in making this a reality.”