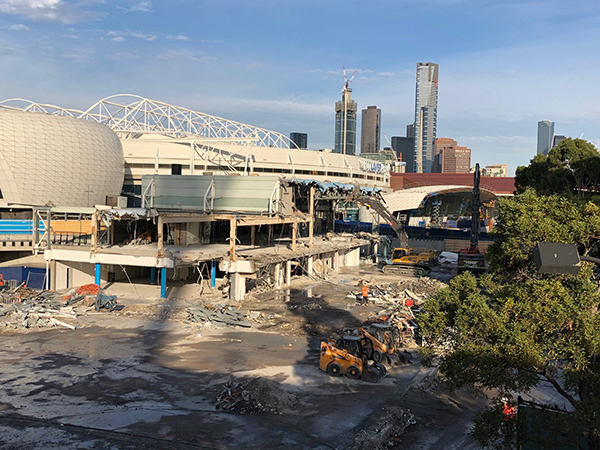 Major demolition work is underway as part of Stage 3 of the Victorian Government’s redevelopment of Melbourne Park, the home of the Australian Open.

The Victorian Government has invested $972 million upgrading Melbourne Park to ensure it remains a world-class sport and entertainment precinct, guaranteeing that the Australian Open remains in Melbourne until at least 2036.

The $271.5 million Stage 3 redevelopment will also include construction of a new multi-purpose 5,000-seat sunken show court arena and a central logistics hub.

These upgrades will not only provide a better player and spectator experience, they will also give local and international media the perfect vantage point for the Australian Open, showcasing Melbourne to the world.

Melbourne Park and the surrounding Sports Precinct are a key component of the Richmond to Docklands corridor, combining some of Melbourne's most attractive river and parklands with the best in sports, entertainment, arts and cultural venues.

The Australian Open alone creates more than 1000 jobs every year and injects more than $280 million into the Victorian economy.

Works on Stage 3 are scheduled to be completed in time for the 2023 Australian Open.