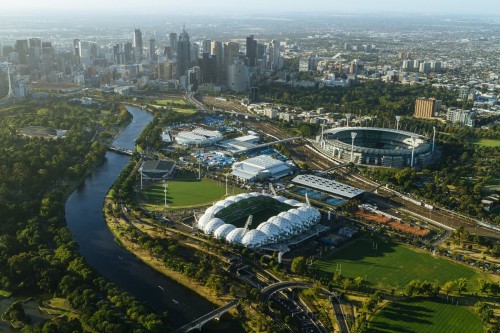 Tennis Australia has launched a $1 billion bid to gain control of Melbourne Park with a view to transforming the home of Grand Slam tournament the Australian Open into a destination that can be utilised on a year-round basis.

First reported by Melbourne newspaper the Herald Sun, the offer, which is under consideration by the Victorian Government includes management of the Park’s Rod Laver Arena, Hisense Arena and Margaret Court Arena, as well as the surrounding precinct, on a 21-year lease.

The proposal would include wider redevelopment of the Park with new entertainment options such as an outdoor cinema, retail outlets and restaurants with a view of the River Yarra. Melbourne Park would also continue to be a major home for live music events, while Tennis Australia is said to be keen to rename Hisense Arena to Melbourne Arena.

Tennis Australia Chief Operations Officer Tom Larner told the news.com.au website “the Australian Open has grown massively over the past few years and we are now in the unique position of being able to use this experience to benefit the whole community.

“Melbourne Park truly is the world’s best sports and entertainment precinct and our proposal will help bring it to life year round. We’ve had a lot of positive feedback and are strong in our belief that this is the way to go.

“We believe there’s enormous scope to activate the whole precinct throughout the year, creating great experiences and giving the community more reasons to come and enjoy the world-class facilities. And this in turn will generate a greater return for the taxpayer.”

With the venue undergoing ongoing renovation, the nest stage of Melbourne’s Park’s redevelopment will include a new 5,000-seat arena as part of plans to ensure the Australian Open continues to be staged at the venue.

The new arena will form part of a $271.55 million project that is scheduled to break ground in 2019. The project will act as the third stage of the Melbourne Park redevelopment. It is hoped the ongoing development work will ensure Melbourne, which has staged the Australian Open since 1988, will retain hosting rights to the tournament until at least 2036.

Images: Melbourne Park from the air, with AAMI Park in the foreground (top) and an impression of the next stage of Melbourne Park's redevelopment with the new 5,000 seat venue in the middle (below).