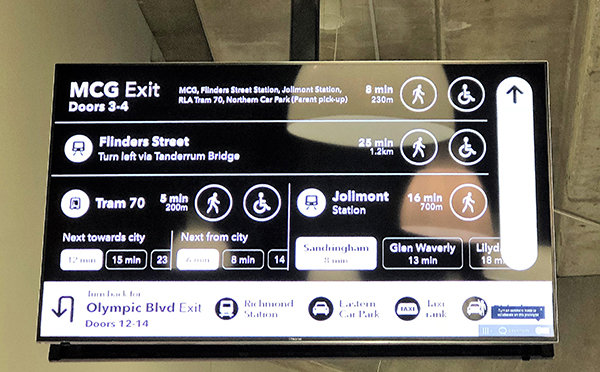 In an Australian-venue first, screens installed at Rod Laver Arena will provide real-time information about trams and trains leaving the Melbourne Park precinct.

The 25 new public transport information screens will provide up to the minute arrival and departure information, as well as accessibility information and options for people with a disability.

Melbourne & Olympic Parks Chief Executive Brian Morris said this is how the organisation invests in facilities and initiatives to ensure an excellent guest experience for the people of Victoria who visit its venues and events, advising "our purpose is to ensure we can enable a wide range of events and sport that appeal to a broad cross-section of the Victorian community; fans from all backgrounds, faiths, music and sporting tastes."

Victorian Minister for Tourism, Sport and Major Events Martin Pakula said the new screens will make it quicker and easier for fans to get home after a concert or blockbuster match, adding “it’s the first time this technology has been rolled out at a venue anywhere in Australia and is on top of our massive redevelopment of Melbourne Park, which will attract even more fans to this world-class venue.”

The screens were trialled during the Maroon 5 and Red Hot Chili Peppers concerts at the arena last month, and feedback has been extremely positive.

They will be rolled-out at other Melbourne & Olympic Parks venues - Margaret Court Arena, Melbourne Arena and AAMI Park - in the coming months.