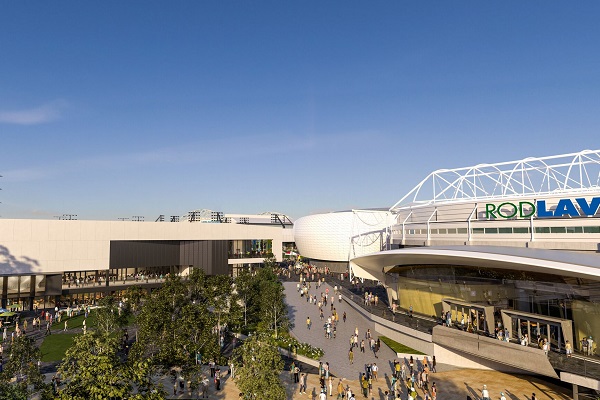 Melbourne and Olympic Parks is set to showcase its new function centre at the Meetings and Events Australia Evolve 2019 Conference, being held at the Brisbane Convention and Exhibition Centre over the coming days.

The new venue, scheduled to open in 2022, is located at the heart of the Melbourne and Olympic Parks precinct with an architectural design that will pay homage to the classic Australian landscape, while its food and beverage offerings are set to include award-winning Victorian wines and locally sourced seasonal produce, promising to elevate the Park’s capabilities.

“Our precinct has helped shape the city’s iconic entertainment legacy through its unique spaces and we’re excited to share this latest offering with delegates at Evolve 2019.

“We’ll be giving buyers the opportunity to learn more about the space and its capabilities and offering them the chance to win a very Melbourne experience – a coveted Rod Laver Arena Superbox double pass to the 2020 Australian Open. Entering is easy, attendees just need to visit the M&OP Photobooth, located at Booth 7, on the day.”

With the capability and flexibility to host both large-scale and smaller, intimate events, construction on the centre is under way, with the precinct currently levelling surrounding grounds, representing the third and final stage of its $972 million redevelopment.

The venue will include eight-metre-high ceilings and floor-to-ceiling windows, projecting natural light across a generous 2000 metre² pillarless ballroom and 800 metre² pre-function area. Across two levels, the upper floor will feature a 250-seat auditorium, an abundance of breakout rooms and an outdoor terrace with uninterrupted views of the Melbourne city skyline.

Evolve is being held from 31st March to 2nd April.

Event bookings for the Melbourne and Olympic Parks function centre are now open for 2022.

For more information go to melbournepark.com.au