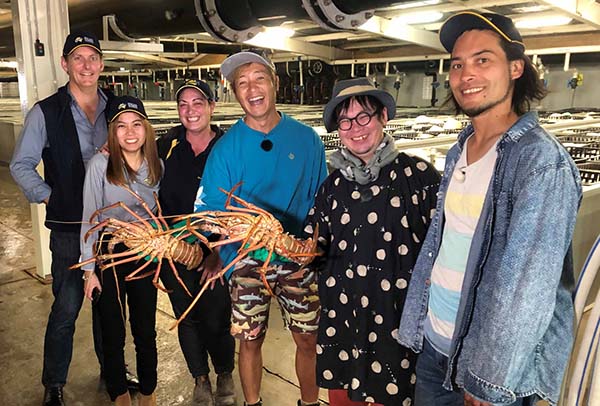 As part of a promotion by Tourism WA, Tourism Australia and All Nippon Airways (ANA) of new direct flights between Tokyo and Perth, Japanese television star and musician Takeshi Tsuruno has embarked on an iconic road trip from Perth to Monkey Mia for a Japanese travel show to be broadcast on BS Fuji TV.

The program is expected to go to air before the end of the year on BS Fuji, which is a free-to-air satellite TV network available to around 40 million households in Japan.

The group will travel through Perth before hitting the road to Monkey Mia. Along the way they will stop and explore a range of destinations including Lancelin, Cervantes, the Pinnacles, Geraldton, Mingenew, Mullewa, Kalbarri, Coalseam Conservation Park, Shark Bay, Hamelin Pool and Shell Beach.

The show will highlight experiences that are attractive to Japanese travellers including interacting with wildlife and nature, viewing wildflowers and indulging in fresh local seafood.

All Nippon Airways (ANA) new direct flights between Tokyo and Perth, which launched on 1st September, 2019, are expected to bring an additional 76,000 visitors to WA over the next three years and inject $175.5 million to the State's economy.

The flights have also been promoted in Japan through a campaign featuring another popular singer and actor, 'Nissy'. The campaign features the Pinnacles, Kings Park, Rottnest Island, Fremantle and the Swan Valley and is currently running on ANA's website and social media channels as well as train stations around Tokyo.

Tourism WA has also worked with key distribution partners in Japan to develop a new range of WA travel packages which include the ANA flights. Trade familiarisations and travel agent training will also raise awareness of the direct service and WA as a desirable holiday destination.

Tourism Minister Paul Papalia advised: "The daily direct ANA flights between Tokyo and Perth will open up the Japanese market like never before.

"We are working hard to promote Western Australia to Japanese people to encourage them to come to WA for a holiday and this TV program forms an important part of that marketing approach.

"Japanese visitors rate modern facilities and nature high on their travel wish lists and these new flights will make Perth's new modern accommodation and dining options, our stunning regions and unique flora and fauna, much more accessible for them."