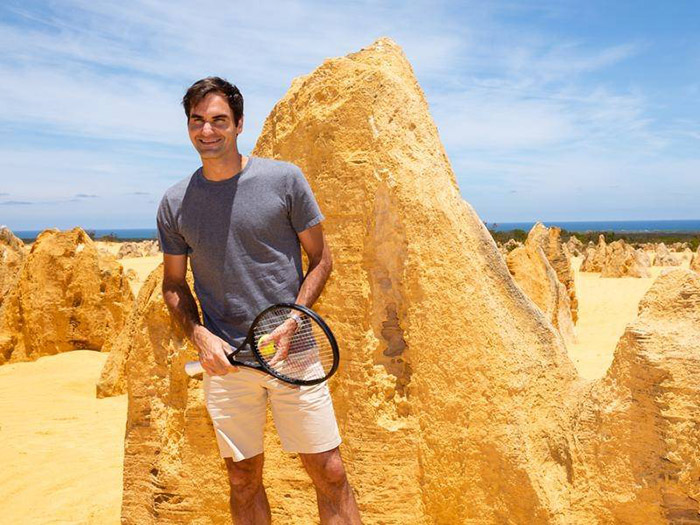 Supported by the Western Australia Government through Tourism WA and Tennis Australia, the unique desert landscape of the Pinnacles today became a temporary court for tennis superstar Roger Federer, ahead of his appearance at the 2019 Mastercard Hopman Cup on New Year's Day.

Federer had barely touched down at Perth Airport, where he was greeted by eager fans, before being flown by helicopter hours later to the tourist attraction about two hours north of the city.

Federer said he had been to some deserts but nothing like the Pinnacles, and described Perth as a place he had come to love over the years.

Federer told reporters "I'm a big fan of road trips, not many people know that.

"One of my big dreams when I retire and I have time is to travel Europe extensively and also places like this.”

Federer likened the desert limestone formations at the Pinnacles in Western Australia to being on the moon.

It is Federer's fifth time in Perth representing Switzerland at the tournament and his first visit to the Pinnacles, located in Nambung National Park.

Federer's famous 'quokka selfie' at Rottnest Island, taken ahead of his 2018 Hopman Cup appearance, made headlines around the world. The photograph reached more than half a billion people in 45 countries and sparked a tourism trend with visitors, including a growing list of celebrities replicating the popular photograph.

In 2018, the Hopman Cup attracted a record-breaking crowd of more than 106,000 people. More than 5,500 fans turned up to watch Federer's open practice session with Australia's Thanasi Kokkinakis.

Tennis royalty Serena Williams and fellow US player Frances Tiafoe will face Federer and Belinda Bencic in the mixed teams tournament, as part of one of the strongest line-ups in the event's 31-year history.

West Australian Tourism Minister Paul Papalia hopes visitor numbers to WA grow as a result of Federer's latest visit to Perth and the Pinnacles, advising "I am delighted to welcome tennis great Roger Federer back to Western Australia, and look forward to watching him, and all the players, in action at the 2019 Mastercard Hopman Cup.

"It is wonderful to have this opportunity to show Roger Federer another extraordinary part of our State. His appeal transcends the game of tennis and his social media reach is enormous.

"Federer's global influence will showcase the Pinnacles to a worldwide audience as one of many unspoilt natural attractions people can experience when they visit WA, along with our delicious fresh produces including local seafood.