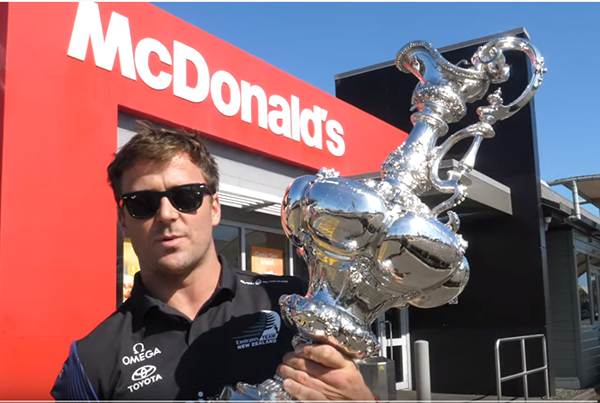 12 months out from the start of America’s Cup yacht racing in Auckland, the Exercise Association of New Zealand (ExerciseNZ) has today challenged whether McDonald’s should be a sponsor on the Emirates Team New Zealand boat.

ExerciseNZ Chief Executive Richard Beddie highlighted research shows that children who start on the path of extra weight gain when young are then set up for major health consequences as they get older, and setting up healthy eating options early on is so crucial.

With Emirates Team NZ now sponsored by McDonald’s, ExerciseNZ is raising concerns about organisations being backed by big fast food companies which can send the wrong message to families.

Beddie explained "we also have sugary drink company, Pepsi’s Gatorade, sponsoring the All Blacks, the New Zealand Maori, Sevens, Women's Sevens, Black Ferns and New Zealand Under-20 for the next five years.

“I call on the government to ban fast food and sugary drink companies, sponsoring sports teams and events, just as cigarette companies are banned from backing sport any more.

“I think it’s cheap that fast food companies use this association of sports events and organisations to look heathy and active when it couldn't be further from the truth.

“It may not imperil New Zealand’s best sports people, but it sends concerning messages to young Kiwis and families.

“Consumption of heavily processed foods is considered one of the many health conditions that the taxpayer ends up paying for, while fast food outlets make millions by peddling their unhealthy food.

“The downstream health issues caused by fast food giants is undermining the government’s health message in a country which has one of the worst rates of children’s physical activity in the world, with 90% not meeting the minimum World Health Organisation guidelines for activity.

“If Kiwi kids are bingeing on burgers, pizza, fries, and other fast foods, perhaps it is time for parents to intervene. Over-consumption not only wreaks havoc on their health but also independently contribute to excess weight gain among children.

“Researchers have often emphasised on the need to take extra care of a child's diet and how important it is to steer clear of junk and fast food.

“Obesity is one of the world's biggest health concerns. Overweight children are at an increased risk of numerous physical and psychosocial problems like fatty liver disease, Type-2 diabetes and depression.

“The Geisel School of Medicine at Dartmouth College in the US has found that fast food, by itself, uniquely contributes to weight gain. Their study has been published in the Pediatric Obesity journal which is a peer-reviewed medical publication covering research into all aspects of obesity during childhood and adolescence.

Image: Simon van Velthooven with the America's Cup trophy at the McDonald's in Feilding. Credit: YouTube/EmiratesTeamNZ