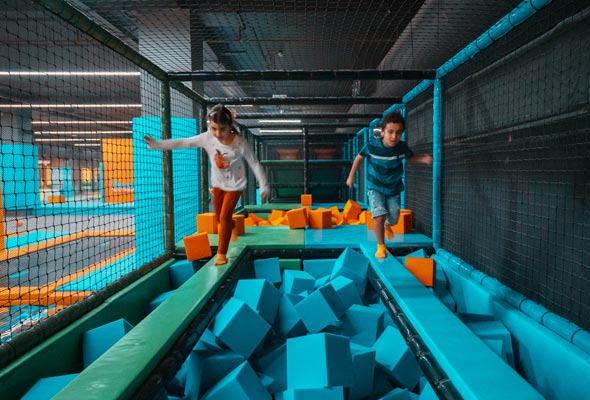 Coinciding with the soon-to-open Nakheel Mall, Dubai's Palm Jumeirah will be opening Trampo Extreme, a new indoor trampoline park at the beginning of December.

This Trampo Extreme is the third park in the city with other locations in Al Ain Mall and in The Dubai Mall.

Older youth are offered the combative elements of Extreme Dodgeball and the challenge of the warrior obstacle course and interactive climbing wall.

A huge foam pit and free jumping areas are set to be enjoyed by all while the internationally themed Kids Zone takes children through a series of 12 activities across three levels of multi-fun for different ages.

A new attraction called Cave, is also coming to Trampo Extreme in the new year.

Featuring the largest indoor caving unit in the world, children can set off to discover various hidden chambers, slides and secret treasures.

The new trampoline park has an onsite Lime Tree Café and also hosts parties in a private party room, equipped with its own dance floor.