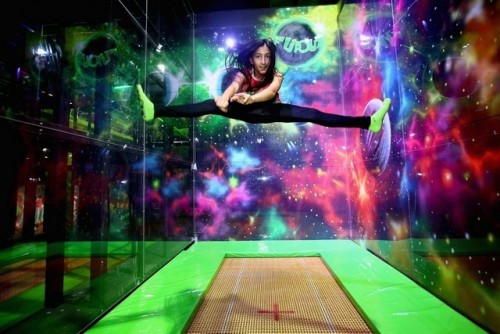 Operating since May, the facility offers a network of 200 interconnected trampolines, 10 different trampoline-based attractions, a double-decker children’s trampoline arena, trampoline football and basketball and 3D wall runners. There is a half-pipe trampoline connected to a foam pit and a 50 metre² pit with two Olympic trampolines for more experienced enthusiasts.

Spaning spans 3,700 metre², the attraction also offers a range of fitness programs with yoga, Pilates and aerobics and rebounding sessions.

Activities are backed by a team of 15 Flip Out instructorss, gymnasts and parkour professionals on the floor to teach guests safe flips and tricks. The attraction also offers a ‘Little Ninjas’ program for children from two years.

Introducing the attraction, FlipOut Middle East Director Sameer Ali explains “if you want to stay healthy and fit but don’t like the gym or simply want to mix-up your exercise routines, jumping a trampoline has tremendous health benefits.”

Founced by Chief Executive Brent Grundy in Sydney in 2012, FlipOut is a Australia’s largest trampoline arena operator, with 39 locations, and has expaneded with facilities in Malaysia, Mexico, Taiwan, New Zealand and now the United Arab Emirates, with plans to open 11 more sites across the region. 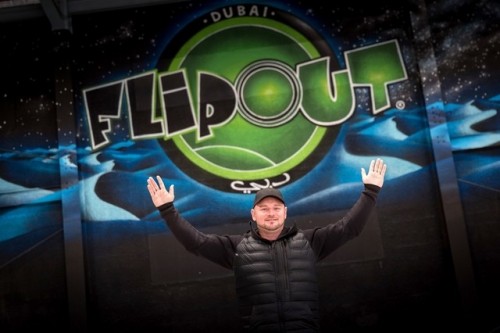 Earlier this year, Grundy told Abu Dhabi newspaper The Nation “we’ve been in Dubai for the last two years, doing our research and finding the right venue.

“Dubai has a regional focus (and) everyone is looking at Dubai to see what the next big, on-the-stage product is going to be. If we can get it right here it will be our launch pad for the rest of the Middle East."

The Dubai facility is the most expensive site in the FlipOut network, costing twice as much to fit out as any previous park owned by the company.

Images: FlipOut Dubai (top) and FlipOut founder Brent Grundy at the facility (below).