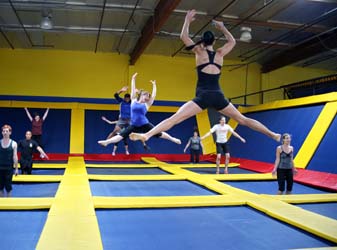 In the wake of a newly published report on injuries in trampoline centres, Standards Australia has highlighted the key role Standards play in public safety.

Standards Australia Chief Executive Dr Bronwyn Evans advised “the safety concerns raised in the report are a primary reason standards continue to be so important to the Australian community.

“The industry has acknowledged this as a concern, evidenced by the fact that a draft standard in this area is so far along the development process.”

The public comment for the draft standard, AS 5159 Trampoline Park Facilities, has recently closed following nine weeks of extensive consultation with a significant number of responses received.

Dr Evans added “once the standard is finalised, unless it is legislated, it is up to the industry to adopt this standard and commit to the benchmarks determined by industry as a whole.

“It is clear, from this report, that there are safety concerns to be addressed and the development and implementation of this standard will be one of many steps necessary to improve the public’s faith in this industry to continue to operate safely.”

In an article published yesterday in The Conversation, the author of the new injury surveillance report, Dr Lisa Sharwood of the University of Sydney along with Professor David Eager, Head of Risk Management and Injury Prevention and Assistant Student Ombud, University of Technology Sydney and  Susan Adams, Paediatric Surgeon and Conjoint Lecturer in the School of Women's & Children's Health, UNSW, explained key problems in trampoline arenas.

They explained “the biggest problem (is) when multiple users (are) on one trampoline, attempting to do somersaults or flips, or landing awkwardly.

“Another key problem is when users jump into the foam landing pit, which is not mandated to ensure sufficient depth, padding and impact reduction. It would be possible to land on a concrete block on your head, for example.”

Highlighting the need for mandatory standards, the trio went on to state “entrepreneurs have cashed in on the rapid growth of trampoline park venues across Australia, with one generating $32 million of revenue in the first two years.

“The problem is that there is currently no Australian standard for indoor trampoline parks - voluntary or mandatory. That means anyone can set up a profitable park by importing cheap trampolines, squeezing as many as they can into a facility, and scrimping on daily safety checks and maintenance.

“Regulators have drafted a voluntary set of safety standards – minimum safety thresholds – to reduce the risk of serious traumatic injuries at indoor trampoline parks. These are currently under review, pending publication later this year. But these are voluntary; park operators can choose to follow them or not.

“Australian standards for indoor trampoline parks would ensure operators are consistently setting up and running safe and well-maintained venues. Recommendations to make these venues safer include:

• Ensuring that surrounding landing surfaces have adequate, appropriately placed protective padding in good condition
• Ensuing that damaged or worn equipment is replaced
• Improving the safety of those who jump into foam pits, by specifying a minimum pit depth and using thick foam blocks on concrete floors to absorb the shock or, preferably, a second trampoline
• Including a ‘failsafe’ mechanism such as nets beneath trampoline mats, or second trampolines
• Daily pre-opening maintenance and safety checks with appropriate governance.

Until park operators are mandated to adhere to safety standards, patrons have limited legal recourse in cases where trampoline parks do not comply.”