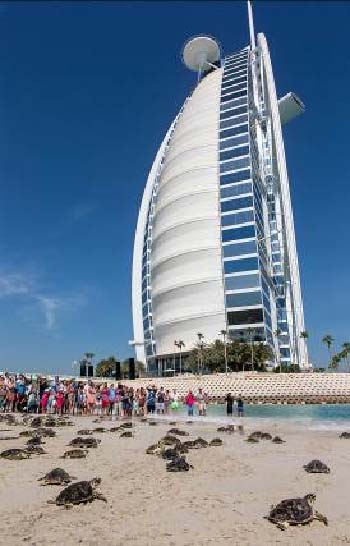 The turtles had all been rescued from the shores of the United Arab Emirates and nursed back to health by the Dubai Turtle Rehabilitation Project (DTRP) - one of the longest standing Corporate Social Responsibility initiatives in the region and the only project of its kind in the Middle East and Red Sea. The turtles were returned back into the wild in the presence of Emirati school children and hotel guests.

Based at Burj Al Arab and Madinat Jumeirah, the project is run in collaboration with Dubai’s Wildlife Protection Office, with essential veterinary support provided by the Dubai Falcon Hospital and the Central Veterinary Research Laboratory. The day-to-day running of the project and the animal husbandry is managed by Burj Al Arab’s dedicated aquarium team.

Burj al Arab’s Aquarium Operations Manager Warren Baverstock explained “we are enormously proud that the project has reached the ten year milestone and would like to thank the public for their help as without their support, the project wouldn’t have been so successful.

"Over the last decade, the DTRP has had a positive impact on national, regional and international sea turtle populations by increasing the number of animals in the environment that would have otherwise perished. It is estimated that only one out of 1000 sea turtle hatchlings will reach sexual maturity and so by saving these animals and releasing them back into the wild we are in effect increasing the number of turtles that could possibly reach breeding age.”

The project is at the forefront of sea turtle rehabilitation protocols and veterinary procedures. Since it was established in 2004, 692 rescued sea turtles have been rehabilitated and returned to the UAE’s waters. The sea turtles are rescued from all around the UAE from members of the public and conservation focused organisations.

The DTRP has hosted a number of ‘Big Jumeirah Sea Turtle Races,’ a fun initiative that aims to inform the public about the plight of the sea turtle, while collecting vital information about regional sea turtle biology.

"During the last release, seven sea turtles were fitted with satellite transmitters, each one sponsored by a Jumeirah property, before being released back into the wild from the beach at Madinat Jumeirah. Hotel sponsors included Madinat Jumeirah, Burj al Arab, Wild Wadi, Jumeirah Beach Hotel, Jumeirah Zabeel Saray, Jumeirah at Etihad Towers and Kuwait’s Jumeirah Messilah Beach Hotel & Spa.

Mojah, sponsored by Jumeirah Beach Hotel, was announced as the winner after clocking up an impressive 1086 kilometres

The project’s tagging initiative, records valuable data and once tracked a turtle that travelled an amazing 8600 kilometres in nine months almost reaching the coast of Thailand. This shows the project not only affects these populations on a regional and national level but also on an international level and allows the team to investigate the success of the rehabilitation protocols and integration of the animals back into the wild. The tags also allow the team to compare habitat, temperature choice and migration patterns for each species, information which is crucial for the formulation of conservation plans. According to the International Union for Conservation of Nature (IUCN), the hawksbill turtle has seen an 87% decline in population over the last three decades with only an estimated 8,000 nesting females left in the world.

Click here to view video footage of the release.