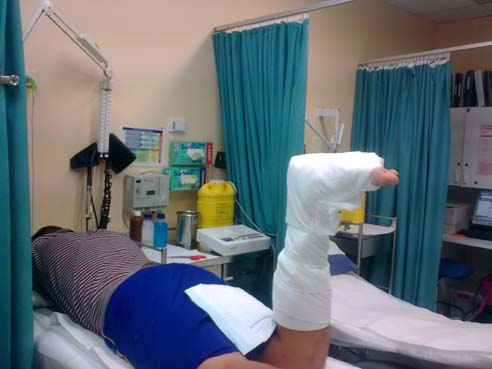 In the wake of reports of a rising number of injuries at commercial trampoline parks, doctors in the United Kingdom are calling for tougher regulations of operators.

An audit of nearly 200 patients treated at the Sheffield Children’s Hospital for trampoline injuries over six months found that around 70 had been hurt at trampoline parks – with 44% of these incuring suffered fractures, compared with 36% injured on home trampolines.

Fearing that the injuries result from many centres not following basic rules on safety, Paediatric Emergency Medicine Consultant Dr Catherine Rimmer told the BBC "there are a lot of trampoline parks that seem to be popping up all over the place that are neither regulated nor abide by basic safety precautions.

"I think the bigger parks are far better, but I know anyone can open a trampoline park in any kind of big open space and they’re the ones parents need to be particularly careful of."

Ambulances were called to nearly 1,181 incidents in English trampoline parks last year, with victims likely to suffer more serious harm than from playing on trampolines at home.

The number of parks in the UK has grown from three in 2014 to about 200, with the International Association of Trampoline Parks (IATP) estimating the number of users at 15 million a year.

The UK has no safety regulations specifically aimed at trampoline parks, although a voluntary British Standard, developed with the IATP and the Royal Society for the Prevention of Accidents, was published in last year.

Explaining that the number of injuries sustained by trampoline park users was comparatively small, IATP UK Chairman Peter Brown told the BBC it would "not be averse" to regulation of the sector.

Commenting on life-changing injuries suffered by a 20-year-old man at Flip Out Stoke in Stone, Staffordshire, in January, a spokesperson for Flip Out Stoke advised "every jumper is given a full safety briefing and told to jump only within their ability. An independent investigation has been carried out and confirms that our team followed the correct process when briefing Daniel (Moseley, the injured man) and in their actions after his accident."

Michael Harrison, owner of Gravity Trampoline Parks and an IATP member, said the sector "must be governed", adding "some of these parks should not be allowed to operate and my worry is that some of these parks are injuring people through financial and commercial reasons."

Speaking about potential regulation, Brown advised “we would like to see these voluntary standards enforced by the Health and Safety Executive so that if places don’t comply, they are served with improvement notices or closed down.”

Brown concluded by advising that just under half of the UK’s trampoline parks were members of the IATP and all members would have to meet its standard by August to gain or renew their membership.