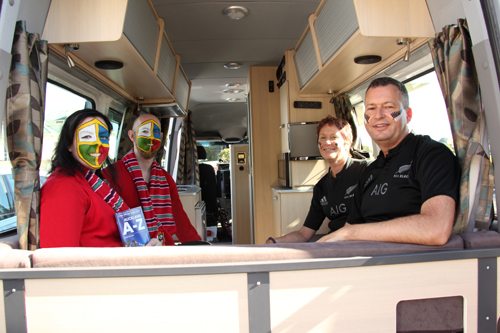 Auckland’s ability to host an army of camper van-driving British and Irish Lions rugby fans at temporary campgrounds next month has just been boosted with at least 200 new sites now available at the region’s famed trotting venue Alexandra Park.

The new self-contained campervan sites announced this week are in addition to 330 previously confirmed on the infield at nearby Ellerslie Racecourse.

Both sites are available for Auckland’s hosting of the two Tests at Eden Park during the DHL New Zealand Lions Series 2017 – and the Ellerslie pop-up campervan site will also be open during the Blues game.

The parks will help the region cope with the influx of visiting British and Irish Lions fans who enjoy a road trip around New Zealand as their team travels the country.

Alexandra Park will have a range of facilities available to campers at the non-powered sites, including toilets and showers, and on-site licenced premises with meals.

Steve Armitage, ATEED’s General Manager Visitor & External Relations, says ATEED has been focused on securing a significant supply of affordable accommodation for fans, explaining “following the Lions in campervans has become a tradition and we’re grateful Auckland Racing Club and the Alexandra Park have agreed to let two of the region’s famed horse racing venues be used to host fans.

“Both venues are close to public transport and just a short distance from Eden Park, and Auckland’s CBD where the Lions Fanzone will be hosted at Queens Wharf, and we think they will provide a great atmosphere for the travelling fan army.”

“The park is steeped in harness racing history, but is now earning a name for tailored event hosting for many diverse organisations. Hosting the campervan pop-up is another example of our commitment to delivering innovation and great experiences for all who come to the park.”

Alexandra Park is included in the recently announced competition for fans who book a campervan site by 31st May.

Anyone who books a stay at either Ellerslie Racecourse or Alexandra Park by the end of May will go in the draw to win a prize pack for two which includes entry to Sky Tower, a Whale & Dolphin Safari, rugby merchandise, and the chance to win back a two-night stay at the campervan park.

Though Alexandra Park’s capacity is 600 sites, the availability will be limited to 200 on the nights before the All Blacks v Lions tests due to long-scheduled harness racing. However, all 600 will be available for the nights of the games.

For more information go to www.aucklandnz.com/dhl-new-zealand-lions-series-2017