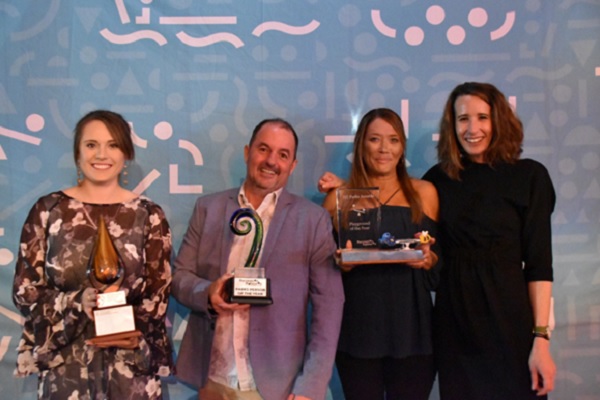 A successful night at the annual New Zealand Parks Awards for Auckland Council has been topped off with Community Ranger Glenn Browne being named Parks Person of the Year.

Welcoming the award, Mark Bowater, Head of Auckland Council Parks stated “Glenn has played a massive role this year with his Ranger Glenn persona and the engagement with young people has been huge.

“He created a series of online videos over the first lockdown which became hugely popular, and this year he has been the face of our Pest Free Auckland social media campaign which has been a phenomenal success.”

Delighted at being named Parks Person of the Year by Recreation Aotearoa, Browne commented “I’m thrilled. I love helping people engage with nature and play an active role in caring for our environment.”

Noting that his focus is on helping the next generation become guardians, he added “our tamariki (children) and mokopuna (grandchildren) are the ones who will be the future leaders for our nation. If we help them understand the importance of our parks and native ngahere (forest), then we all benefit.”

Browne acknowledges that the award isn’t about what he does, but rather he is simply shining a light on the hard work of his colleagues in a way that is speaking to young people, he added “without the amazing job that all the rangers and volunteers do in our parks, there would be no Ranger Glenn.”

Alongside Browne’s win, Auckland Botanic Gardens won the Healthy Park of the Year Award while a third award scooped by Auckland Council went to the newly completed Kopupaka Reserve in Westgate which was named Playground of the Year.

One of the top destinations in Tāmaki Makaurau, Auckland Botanic Gardens follows sustainable horticulture practices, including aiming for spray-free gardening, using organic mulch and compost produced on site and using a combination of minimal mowing techniques and growing meadows to maintain the grounds.

The newly completed Kopupaka Reserve has been developed to serve the growing community and has a nod to its former use as a strawberry field, with the playground including a custom-designed play tower that represents orchard crates.

Councillor Alf Filipaina, who is the Chair of the Parks, Arts, Community and Events Committee said the three awards represent the incredible work of hundreds of staff, contractors and volunteers.

He stated "I join with all of Auckland in congratulating all the staff from both Park Services and Community Facilities whose hard work have resulted in some beautiful parks for us all to enjoy.

“I especially want to acknowledge the way they all went about their work while we were in lockdown last year. Their mahi meant we could all keep healthy and well while we were fighting off COVID-19.”

The New Zealand Parks Awards are run by Recreation Aotearoa and seek to recognise excellence, innovation, effectiveness and outstanding spaces and places that support activity within the recreation sector.