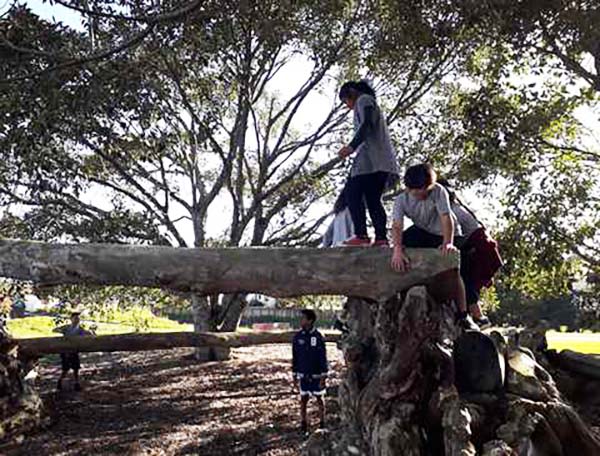 The Playgrounds Excellence award was for the Mara Hupara Playground in the Te Auaunga stream restoration project.

The Te Auanga Awa Oakley Creek project to upgrade the stormwater system in the area transformed the overgrown and inaccessible urban stream into an open waterway. The project identified an opportunity to work closely with mana whenua and local communities, improving the ecology and experience of the area as well as placing 26 unemployed locals back into employment or training.

Stream restoration along 1.3 kilometre of the creek included the planting of 100,000 natives. Eight hectares of open space has been restored with shared pathways, pedestrian bridges, community orchards, a community fale and atea space, and even an outdoor classroom have been introduced.

The Māra hūpara playground built as a part of the project is the first of its kind, a natural play area which interpreted the environmental and cultural narratives of the site. This was designed collaboratively with mana whenua, Local Boards, HNZC, schools, artists, and the Auckland Council ‘family’.

The playground brings together a collection of ancient Māori play artefacts into a single space to create a traditional Māori playground.

One artefact, more commonly known as kōpapa, is a network of long logs, linked one to the other, to create elevated walkways. Historically, these networks were a buzz of activity, serving multiple uses for communities; a path to traverse marshy areas and flood plains, tree crowns to set bird snares; secret, hidden escape routes high in the tree for forest-dwelling communities.

Now, they’re a creation for children to play, explore and build confidence at height.

The judges commented that "Te Auaunga Awa Oakley Creek embodies the principles of sustainable management and has been well-conceived from the outset, with clear goals and objectives to achieve sustainability outcomes through a variety of initiatives.

"The project is an excellent example of community collaboration and design-led approach to enhancing environmental and cultural narratives of the site.

Project Manager, Tom Mansell noted that "this is truly a partnership grounded in the desire to achieve shared outcomes across all of the sustainability pillars.

"At every opportunity, we sought ways to deliver tangible cultural, social, economic and environmental benefits. The project reduced flooding, improved water quality and had high community and iwi engagement.”