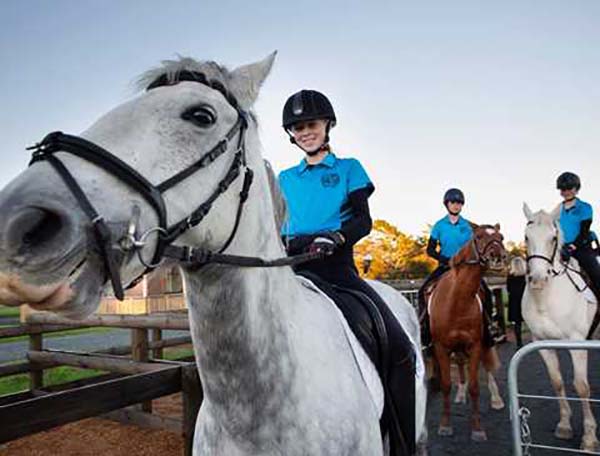 New pony facilities opened this week in Greenhithe, a suburb of the North Shore of Auckland, giving riders a central hub for equestrian activities. The new all-weather arena includes a new riding path with lighting so riders can easily connect to the second arena on the other side of the park.

A new clubhouse has also been built, alongside toilets, extra parking for horse floats and new grooming pens.

The $8 million facilities at Wainoni Park represent an extensive upgrade to existing facilities and come as part of the NZ Transport Agency's Northern Corridor Improvements project.

“They have been built for the newly formed Wainoni Park Pony Club and include a specially built area to cater for the Greenhithe Riding for the Disabled who have always trained in this area,” says Miles.

"They look fantastic and will benefit riders across Upper Harbour and will enable participation and growth in the sport for the foreseeable future," she said.

Construction of the facilities started in March 2018 following the merging of the Rosedale, Greenhithe and Whenuapai Pony Clubs to form the Wainoni Park Pony Club.

The Wainoni Park Pony Club becomes the second of three sporting facilities to be relocated and improved as part of the Northern Corridor Improvements project.

A new North Harbour BMX facility was completed last year and North Harbour Hockey is also scheduled to move to a new facility, to enable construction of the new motorway route.
The Transport Agency worked with the affected sports clubs, Auckland Council, Upper Harbour Local Board and the local community resulting in the proposal to relocate the three clubs being approved in December 2017.

The Northern Corridor Improvements project will provide a much-needed transport upgrade for the whole Albany and North Harbour community. It includes a proposed busway station, over 7kms of new walking and cycling paths, a new motorway connection between SH1 and SH18 and will open up access to the Western Ring Route and travel to the airport.

For information on the Wainoni Park Pony Club visit www.wainoniparkponyclub.co.nz

Image: Riders at the opening of the upgraded Wainoni Park Pony Club.