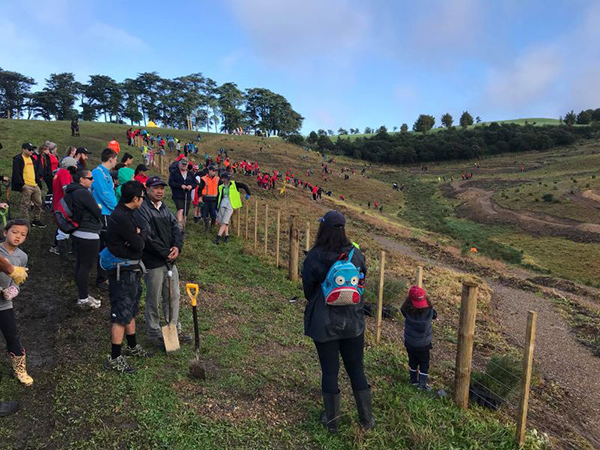 The addition of thousands of trees to Manurewa’s Totara Park over the last year, continues to play a significant role in the greening of Auckland.

Manurewa Local Board chair Joseph Allan advises "Auckland Council’s urban ngahere strategy is to have 15% average tree canopy cover in local board areas, so we have been pleased so many groups have joined hundreds of community volunteers at planting days at Totara Park and other spots across Manurewa.

“We have to acknowledge the Friends of Totara Park too, who do an outstanding job of building interest in supporting a park that plays such a big part in Manurewa residents’ lives.”

Allan notes that the range of Totara Park supporters is diverse, with one valued partnership involving the mountain bike club.

Allan adds “members have fenced off areas and built tracks but then they have planted them out and taken responsibility for maintaining them, and they’ve also become great pest eradicators, tackling possums, rabbits and stoats.”

Some of the planting undertaken across the area has also been designed to prevent cattle from entering the headwaters of the Puhinui Stream, a move critical to improving the health of the Manukau Harbour.

Allan also advised “we are undertaking water quality testing in coastal and inland sites and our efforts around the Puhinui Stream will help inanga re-establish, and the lessons we are learning are being applied to Papakura Stream.

“More than 100,000 plants have gone into Totara Park alone and that is great for the environment and our birdlife.

“We all want to be able to say we did our best to safeguard and improve our home.

“It’s a pleasure to have so many Manurewa residents working with the board at planting days to join the fight to create a greener environment.”

Regular planting days are scheduled for Totara Park and other Manurewa venues this year, and the board hopes as many people as possible take part.

Details of planting days across the Manurewa Local Board area are regularly included on the board’s Facebook page https://www.facebook.com/ManurewaLB/