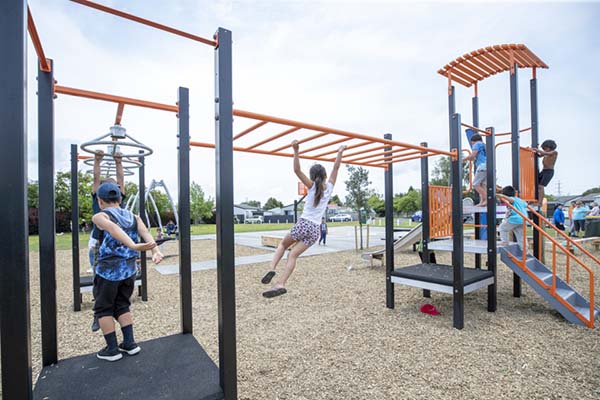 Auckland Council’s Papakura Local Board members have been joined by community locals to officially open a refurbished park at Takanini’s Clarice Place, featuring a basketball half-court, a range of play equipment, and green play spaces.

This follows the opening last year of the refurbished park at Cliff Road, and another at Berwyn Avenue in Takanini in September. Another renewed playground at Cross Street in Papakura is set to open on 1st December.

Papakura Board Chair Brent Catchpole noted that local parks are important because they keep children safe and occupied in their own neighbourhoods commenting “Families expect that their children should have access to play spaces within easy reach, and the board is working hard to make that happen.”

Manurewa-Papakura Auckland Council ward representatives Angela Dalton and Daniel Newman joined board members at the opening with Councillor Newman adding “it’s great to talk to locals and see them excited to have the park looking better than ever and open again.”

The park’s redevelopment was guided by extensive community input into what residents and their children wanted in their play space.