Australian Olympic Committee President John Coates has suggested that Brisbane will not need an 80,000 capacity athletics stadium to host the 2032 Olympics if the south east Queensland bid to host the Games is successful.

Part of an Australian delegation meeting with the International Olympic Committee in Switzerland this week to discuss a potential Queensland bid for the Olympics in 2032, Coates said a smaller venue could be built.

With plans for an 80,000 capacity Olympic stadium – to be built at several potential Brisbane locations - revealed earlier this week as the centrepiece of a Queensland bid for the 2032 Games, Coates, an IOC member and former Vice-President, indicated that a smaller stadium would fit the bill to host the athletics events and opening and closing ceremonies of the Games.

Citing next year’s Tokyo Olympics and Paralympics, he made reference to Tokyo’s National Stadium which will have a capacity of 68,000, although it will be able to hold 80,000 with temporary seating during next year’s Games. London Stadium, built for the English capital’s staging of the Olympics in 2012, has a regulated capacity of 60,000 – temporarily expanded to reach 80,000 during the Games.

“And that could be a stadium that could reduce to a lesser amount afterwards, depending on what the legacy is going to be … (there is) no requirement for 80,000.” 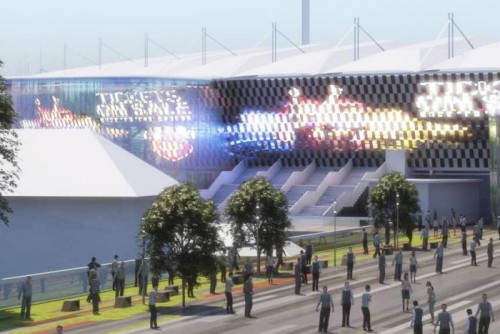 With Brisbane landmark the Gabba in need of significant redevelopment and local sentiment suggesting the inner city venue should be the Games centrepiece, Coates indicated this could be a possibility, stating “I think there’ll be something developed for athletics and the ceremonies (and) there is an option with the Gabba.

“But probably, I think, a new stadium has to be prepared, but similar to the way that it was done with London, it could reduce to something afterwards.

International Olympic Committee President Thomas Bach has said he was impressed with how advanced the preparations were when he visited Brisbane recently, noting “this project has all the ingredients to become a successful candidature.”

India and Indonesia have also expressed an interest in hosting the 2032 Olympics, while North and South Korea have been reported as considering an historic joint bid.

Images: Brisbane's Gabba from the air (top) and 2018 plans for an upgrade of the Gabba precinct (below).