Crowds - and losses - rise at Stadiums Queensland venues in 2017/18

The figures in the Annual Report, released without fanfare in October, showed that attendance at Stadiums Queensland’s nine venue rose from 3,992,203 the previous year to 4,353,779 in 2017/18.

The figure was bolstered by increased attendance at the Metricon and Cbus Super Stadiums during April’s Gold Coast Games.

Attendance at Stadiums Queensland’s other Games venue, the Sleeman Sports Complex, fell from 719,482 to 668,983.

Concerts, comedy, acrobatic and sports events at the Brisbane Entertainment Centre accounted for more than 650,000 (up from 513,772 the previous year) of SQ’s more than 4 million total patrons. 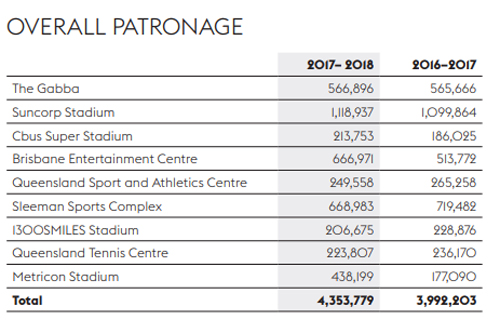 Questions about Stadiums Queensland’s effectiveness prompted the Queensland Government to appoint a taxpayer-funded taskforce to review its operations in April, with its report due to be released in the coming days.

In July, the Queensland Government sensationally replaced the board of Stadiums Queensland following media report that it was overcharging hirers including the Gold Coast Suns and Titans with soaring rents and levies.

In the Annual Report, outgoing Stadiums Queensland Chair Sophie Devitt acknowledged “some challenges for the organisation following reports in the media regarding the hiring arrangements for SQ venues.”

She continued “at SQ we pride ourselves on being a streamlined and cost efficient organisation, working together with our hirers to review operations to achieve costs savings.”

In relation to the Taskforce, Devitt advised “(it) is considering a range of matters including SQ’s current ‘clean stadia’ model which provides many of the hirers with the majority of revenue from their events, including ticketing sales, signage, merchandise, the sale of corporate facilities and other incomes while meeting their event day costs.”

Devitt, who is stepping down from her role, also advised of work to implement a wide range of security enhancements at  venues after the Queensland Government announced an $8.3 million major upgrade of security infrastructure in response to the evolving global threat of terrorism related activities.