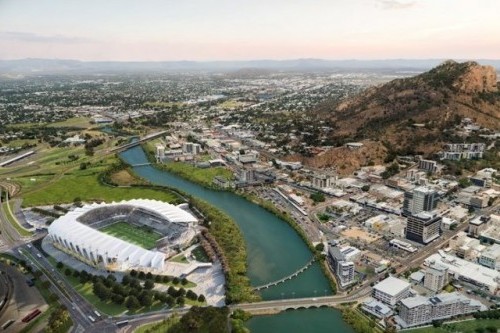 Construction of the North Queensland Stadium in Townsville is moving forward with the first seating platforms having recently been installed.

As reported by the Townsville Bulletin, the first of around 2000 prefabricated seating platforms, being manufactured for the venue by local company Jackson Semler, are progressively being fitted to large steel-rakers that form the skeleton of the venue.

Welcoming the milestone, Queensland Minister for Sport Mick de Brenni said the locally fabricated pre-case concrete seating platforms would transform the site, commenting “this venue is about to start looking distinctly like a world-class stadium under construction.

“It really is pleasing to see the project progressing on schedule with predominantly local workforce driving the activity.”

In the wake of lower than expected attendance for the recent Australia vs Argentina rugby union clash on the Gold Coast, local backers of the Townsville venue are suggesting that future Wallabies tests be staged at the North Queensland Stadium, arguing it would draw bigger crowds than CBus Super Stadium.

Backing this, a Rugby Australia spokesman told the Townsville Bulletin the organisation planned to work towards bringing events to the new venue once it was completed in 2020.

The spokesman advised “Rugby Australia has been following the Townsville Stadium development closely and is looking forward to working with the state and local governments to bring quality rugby content to Townsville once the stadium is in action.”

Townsville Enterprise Director for Tourism and Events, Bridget Woods said the organisation was “incredibly supportive” of the potential for hosting state, national and international elite sporting events in Townsville.

Woods stated “our region has some of the most passionate fans you will ever meet, regularly travelling from across the state to be a part of the action and atmosphere that live sport creates.

“North Queensland has a catchment of over 500,000 people to draw from for these events, from south to Rockhampton, north to Cairns and west to Mount Isa.

“The North Queensland community deserves the same calibre of live events and entertainment opportunities that the south east corner can access.”

Woods said Townsville Enterprise was working with the Townsville City Council, Stadiums Queensland, and Tourism and Events Queensland towards securing sporting and other events for the new stadium from 2020.

Image: One of a series of recently releases images of how the new North Queensland will look when completed. Courtesy of the Queensland Department of State Development, Manufacturing, Infrastructure and Planning.