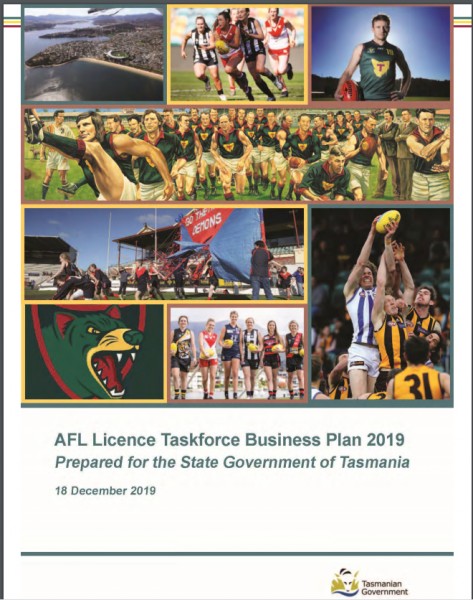 The long-awaited AFL Taskforce report investigating the support of granting a Tasmanian AFL and AFLW licence was released today and shows that a Tasmanian team from 2025 onwards is viable.

Tasmania Minister for Sport and Recreation Jane Howlett advised that the Tasmanian Government is committed to securing an AFL and AFLW team of their own and has welcomed the AFL Taskforce business case report findings.

The long-awaited AFL Licence Taskforce Business Plan 2019 outlines that the inclusion of a Tasmanian team not only stacks up financially but can strengthen the AFL by making it a national competition.

The report into whether a Tasmanian team should be granted an AFL licence has found the state would benefit from more than $110 million a year delivering more than 360 additional jobs, urging the Tasmanian Government to take the case to the code's governing body - or watch as the code dies.

Minister Howlett noted “we were very clear when briefing the Taskforce that a Tasmanian Team must benefit the whole state, and we are pleased to see the report present a model that unites Tasmania, with games to be shared in the North and South of the state.

The report noted that Tasmanian support for AFL clubs Hawthorn and North Melbourne was in decline and that a Tasmanian AFL and AFLW team, the Devils, would not only thrive and prosper, but "must be strongly considered to revive and sustain the sport in Tasmania.”

The 268-page document highlighted that Tasmania "has the opportunity now to change the AFL's misperceptions" urging the Government to secure a timeline with the administrators for a team to enter by 2025.

In response to the report’s findings Minister Howlett commented “Tasmania has experienced first-hand the substantial benefits of hosting AFL games at our Blundstone and UTAS stadiums, and the current arrangements with Hawthorn and North Melbourne have proven successful for all parties. As we progress our objective of our own team we will work closely with our partners to ensure there is a smooth transition phase which meets each other’s needs.

“We know Tasmania is an AFL state, having delivered some of this country’s finest footballers over the years and our own team overwhelmingly endorsed through the “United We Stand” campaign.

“Tasmanians will always come first, and we will now consult with the football and broader community including the AFL on the contents of the report before finalising our position on the recommendations and outlining the way forward.

“I would like to thank the AFL Taskforce for their commitment to building a business case for a Tasmanian Team. This report has taken much time and effort from a group of very dedicated people and I thank Brett Godfrey for his Chairmanship and each of the TaskForce members, Paul Eriksson, James Henderson, Julie Kay, Grant O’Brien, Nick Riewoldt and Errol Stewart for their efforts along with Adam Sproule who has supported them via State Growth.

“The Taskforce will now continue to be engaged for a period of time to assist us with the next stage of our engagement with the AFL commission and club Presidents.

The report noted that to miss the opportunity of having a representative team in the national competition would risk AFL giving further ground to other codes, but also found that existing Tasmanian AFL stadia capacities are incapable of hosting the forecasted average attendance or member demand required for a Tasmanian team.

Key infrastructure not currently available but required prior to a Tasmanian club's first season includes high-performance training facilities with the taskforce recommending that facilities for playing, training, recovery and administration be upgraded in both Launceston and Hobart as part of the unified 'north-south' model.

The report suggested "this will deliver improved spectator and participant options, with an end game for consideration being a covered, multi-purpose stadium to dramatically change the sport and entertainment landscape in Tasmania.

"In terms of the key drivers around team location it should be reconsidered to centre around player attraction and retention, the availability of partner jobs, schools and general demographics.”