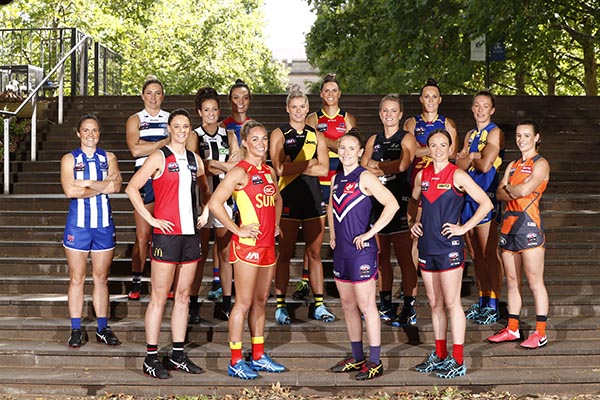 Ahead of the 2020 NAB AFLW Competition, the AFL has recently announced several AFLW partnerships with two of Australia’s leading organisations, Coles and BHP joining as major partners. LINX Cargo Care Group, Thrifty, and AAMI have also joined the AFLW family, citing the synergy with the league and the movement it has created, while existing partners, Special K and Chemist Warehouse have both re-signed until the end of October 2022.

Long term partner, NAB, has held the naming rights of the women’s competition since its inaugural season in 2017. NAB Chief Customer Experience Officer Rachel Slade said the company is committed to growing the game at all levels.

AFLW players, the AFL, its clubs, fans, and partners are preparing themselves for another season of progress both on and off the field.

Australian Rules Football has often been touted as a national game, but in 2020, we can truly say it’s a women’s game too.

Growth is due to an entire support system of volunteers, administrators, fans, industry leaders and champions of the game, who support the hundreds of thousands of females to play nationally in grassroots and amateur leagues, as well as in the elite game.

AFL General Manager of Commercial, Kylie Rogers, said the dedication shown by partners to make a difference in women’s sport is the foundation for the evolution of AFLW.

Rogers noted “demand from partners stems beyond a desire to be associated with football. We have developed long-term, value-based relationships with brands whose purpose and mission are aligned to ours.

“The competitive advantage offered by women’s football is in the quality of engagement, accessibility, and storytelling of talent within our network. Partners have direct access to all levels of the sport, and the association with the purpose of the AFLW has a halo effect of positive sentiment in market.”

The professionalisation of women’s football has increased participation by normalising women’s involvement in a game that was once only seen to be for men and boys. The NAB AFLW Competition has provided positive role models and forged a new pathway for girls to play competitive sport as a profession.

NAB Chief Customer Experience Officer Rachel Slade advised “we’re proud of what we’ve achieved through our partnership with AFLW. Through the NAB AFL Women's Draft, we’ve seen hundreds of women realise their potential, with more to come through pathway programs such as the NAB AFL Women’s Under 18 Championships and NAB AFL Women’s Academy.

“The support of these programs highlights how NAB is dedicated to community initiatives in a bid to advance gender equality.”

AFLW stands for more than a game, with partners recognising the role they play when it comes to promoting inclusion and giving back to local communities. Partnering with a number of community focussed programs across the country, Toyota Australia Chief Marketing Officer Wayne Gabriel is thrilled to be part of the elite female competition as the official automotive partner of AFLW.

Gabriel added “Toyota is passionate about supporting football across all levels, so we’re delighted to extend our support to AFLW in addition to our partnerships with community programs including the NEAFL, AFL Inclusion Carnival, National Wheelchair AFL Championships, Volunteer of the Year Awards and ‘Club Help’ online platform.

“Since 2008 Toyota has been supporting grassroots football through our Good For Footy Program through various community initiatives which include The Good For Footy Raffle and more recently the Gear Grants Program. To join like-minded partners who share our vision of community and mobility is something we’re really excited about and we can’t wait to see what 2020 brings.”

In addition to participation growth, a 2018 Neilson Sports Research report showed that women’s sport is the fastest growing sports fan segment worldwide. Across eight global markets, 84% of general sports fans have an interest in women’s sports. Half of those are men, proving the fierce competitiveness shown by women in sport has no gender boundary in its appeal. It’s not just audience connection that brands value said Rogers. They are passionate about diversity and inclusion and committed to achieving gender equality. Partnership with AFLW provides another avenue to drive progression.

New partner, LINX Cargo Care Group, acknowledged the role it plays in creating opportunity for diversity within its own business.

Anthony Jones, Chief Executive, LINX Cargo Care Group noted “the supply chain and logistics industry have until recently been largely a male-dominated sector, much like Australian football, until the AFLW paved the way for a more diverse, inclusive sporting landscape.

“LINX Cargo Care Group is committed to bringing that same inclusive and disruptive ethos to the supply chain and logistics sector, which makes our partnership a natural fit.”

Rogers also added “the opportunity to be involved in football should be the right of every girl and woman regardless of background or ability. We are proud that our partners share the same vision.

“With the first bounce approaching, it’s a good time to pause and reflect on what has been achieved over the past four years as a collective. Together with our partners, we welcome what it means to be a part of something bigger and celebrate women of football, from grassroots to the elite game.”