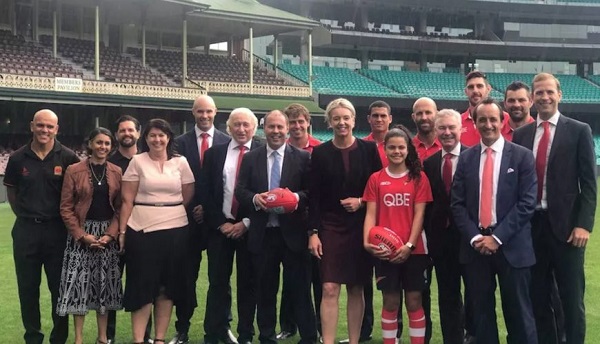 In the latest election announcement by Australia's political parties, leading Liberal and National Party figures Josh Frydenberg and Senator Bridget McKenzie have repeated the commitment from the Federal budget to contribute $15 million for a new high-performance home for women’s sport in NSW.

Announced yesterday at the Sydney Cricket Ground, the sporting infrastructure funding will, according to a statement from Federal Minister of Sport MacKenzie, “pave the way for the Sydney Swans entry into the AFLW and boost the facilities available for the successful NSW Swifts.”

The funding will contribute to the $55 million project to transform the Royal Hall of Industries at Moore Park to deliver dedicated facilities for a Sydney Swans AFLW team, while also becoming the new home for the NSW Swifts netball team, as well as allowing for the expansion of the QBE Sydney Swans Academy youth girls and boys programs to more than 1,000 participants.

Facilities have been seen as a key barrier for the Sydney Swans entering a women’s team into the AFLW competition, so the commitment of taxpayer funds from Treasurer Frydenberg and Senator McKenzie is expected to see this situation change.

Welcoming the commitment, Sydney Swans Chief Executive, Tom Harley advised “this is a significant day for AFL in New South Wales because it paves the way for the Sydney Swans to have a women’s team.

“Facilities have been the key barrier to us entering the AFLW competition - simply put, we had nowhere to house a team and we strongly believe that an elite women’s team deserves elite facilities.

“The Sydney Swans HQ and Community Centre means that young girls can join young boys in aspiring to pull on the red and white jumper.

“Furthermore, speaking as a father, I’m looking forward to my daughter having even more strong female role models to look up to.”

Treasurer Frydenberg said the money is not contingent on the election result, but rather has already been allocated in the Federal Budget.

He advised “this funding will create state-of-the-art facilities for a Sydney Swans AFLW team, for the NSW Swifts netball players, as well as a host of other organisations.

“The facility will be used by the broader community and elite athletes.

Senator McKenzie said the new facility will provide the necessary infrastructure to grow women’s sport, adding “importantly for young athletes, it will provide a pathway for a locally home-grown Sydney AFLW team.

“It will mean young women can come to their local grounds and see the champions that they want to aspire to be in the future.”

The development will include an international standard netball court, which will be available for use by senior teams, junior development programs and open community access.

The Swans and Swifts will expand their school and outreach programs, taking health and wellbeing education to more than 5,000 children annually.