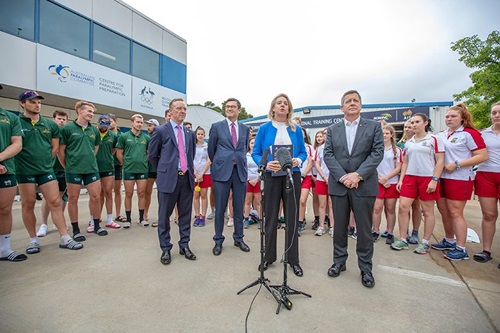 Federal Minister for Sport Bridget McKenzie has announced a $50 million boost in high performance sport investment over the next two years as Australia builds towards the 2020 Tokyo Olympics and Paralympics.

Senator McKenzie made the announcement this morning at Rowing Australia in Canberra, where the leadership hub of Australia’s high performance sport system, the Australian Institute of Sport (AIS), is located.

The added investment will enable the AIS to invest in initiatives, programs and resourcing for the collective benefit of achieving Olympic, Paralympic and Commonwealth Games outcomes, as well as supplementing grants already issued directly to sports.

Senator McKenzie explained “this investment will allow our high performance athletes to achieve their dreams by competing against the world’s best.

“The AIS, on behalf of the Liberal National Government, already distributes about $100 million annually in direct grants to high performance sports. This additional investment is about giving the AIS and Australian sport an overall boost that will have broad and lasting impact.

“High performance athletes are role models for our younger athletes and their success encourages more Australian kids to participate in sport.

“The AIS has launched an exciting new strategy that aims to ensure Australian sport is at the forefront of ethical sporting performance and is helping our athletes inspire the nation through their international success.

“This investment is not just about the immediately foreseeable results at events such as the Tokyo 2020 Olympics and Paralympics, but also the long-term development of Australian sport’s pipeline of emerging athletes and leaders.

“It aligns with the Coalition Government’s release of Sport 2030 earlier this year which sets out a long-term roadmap for Australian sport and physical activity at all levels.”

Sport Australia Chair John Wylie welcomed the investment, commenting “on behalf of the Sport Australia Board and the AIS, we welcome this investment and the responsibility to keep growing Australian sport.”

Sport Australia Chief Executive Kate Palmer said the AIS, in partnership with sports, will invest in new and expanded programs that are critical to Australia’s international competitiveness.

“There will be greater investment in developing the very best sport leaders within our system, including coaches, high performance staff and sport medicine practitioners so that this expertise is spread far and wide around the country and more directly available to athletes when and where they need them”.

“Athlete wellbeing services and support will be greatly enhanced under the national leadership of the AIS. The AIS will lead and assist with embedding more expertise directly into sports, assisting athletes during and after their sporting careers so they are better engaged with their communities.”